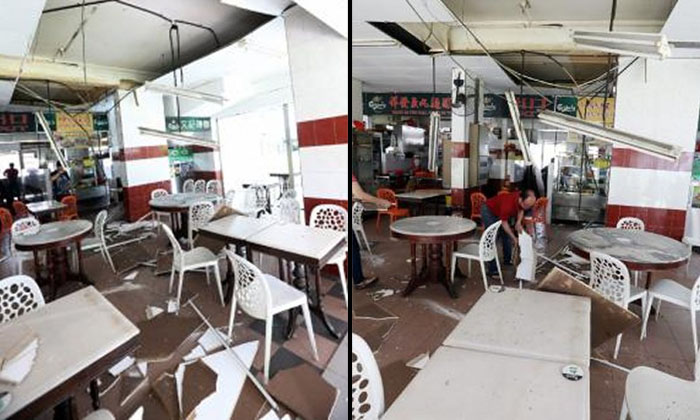 He was collecting money from a customer at his drinks stall when he heard a loud crash.

When Mr Zhang realised what had caused the sudden sound, he was shocked.

Several ceiling boards in the coffee shop had fallen onto the floor and smashed into pieces.

"It was a very loud bang. There was a lady walking past and it nearly hit her," the drinks stall operator told The New Paper yesterday.

Mr Zhang said he immediately called his mum, who owns the drinks stall, and the person-in-charge of the coffee shop to tell them what had happened.

It was the first time in his nine years of working at the coffee shop he had encountered something like this, he said.

A woman, 30, was walking towards the drinks stalls when she was nearly hit by the falling ceiling boards.

Her father, who went to the coffee shop afterwards, told Shin Min Daily News that his daughter was in shock.

A regular customer, who wanted to be known only as Raju, 49, a manager, told the evening daily he was having his lunch when the ceiling boards fell.­

He said: "The entire incident happened in less than five seconds. A family of five who were sitting at the corner were startled.

"Their two children, who look no older than 10 years old, ran out immediately. Others also ran for their lives."

The affected area was about half the size of a badminton court.

Broken pieces of the ceiling boards were all over the floor.

Four to five fluorescent light holders and a few pieces of wire were also left dangling in mid-air.

After the incident, the person-in-charge of the coffee shop, who wanted to be known only as Mr William, 55, told TNP he had left the coffee shop for about half an hour when the ceiling fell.

He said: "My owner bought over the coffee shop eight years ago and we had a major renovation. The ceiling was new."

He said that he had hired workers to remove the affected ceiling, light holders and wires to ensure that the area is safe and will not affect customers.

"We will be changing the entire ceiling and this will take about a week.

"The cost is not known yet. Business will be as usual during this period," said Mr William, adding that he has engaged a contractor to review the situation.

Related Stories
Water gushes out from ceiling at Rivervale Mall food court
Employees scramble to save luxury bags at MBS shops as water leaks from ceiling
Part of foyer's ceiling falls off at Lot One shopping mall
More About:
Ceiling board falls in Bukit Merah coffee
dangerous