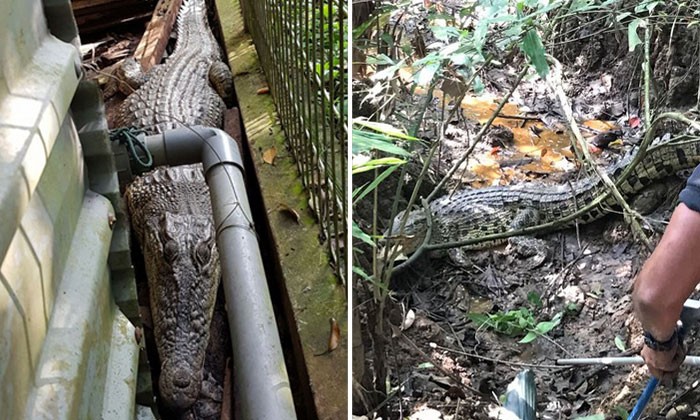 Most long-time residents know the ins and outs of their neighbourhoods.

But one unlucky resident of Sungei Buloh not only ended up in unfamiliar territory, it got itself stuck in a nearby fish farm while out hunting for supper one night.

A crocodile, estimated to be between 2.5m and 3m long, had wandered into the facility through a drainage pipe, said Animal Concerns Research and Education Society, Singapore (ACRES).

It was rescued on Friday (Nov 18) by a team of four from ACRES after farm workers reported the sighting.

He said that the animal was safely restrained, passed through a gap in the fence, and subsequently released back to the wetland reserve.

The reptile was identified as an estuarine crocodile, a nocturnal animal that is native to Singapore.

It spends most of its day basking at the water's edge or stays hidden among vegetation, according to National Parks (NParks).

The crocodile can also be found in areas along the island's northern coastlines and mainly feeds on fish and small animals.

Mr Kalai vanan said that the estuarine crocodile population has dwindled over the years due to overhunting, leather trade, and destruction of its natural habitat.

"It is important that we learn to co-exist with them and help to raise awareness amongst the younger generation so that they will grow up to protect the wildlife that can be found in Singapore," Mr Vanan said.

If you encounter a crocodile at the Sungei Buloh wetland reserve, NParks advises visitors to do the following:

- Stay calm and back away slowly

- Do not approach, provoke or feed the animal

To report a sighting of a wild animal in places that are not their natural habitats, call ACRES' 24-hour wildlife crime and rescue hotline at 9783 7782. To contribute towards ACRE's wildlife rescue efforts, visit their donation web page.

Related Stories
It's not every day you see dolphins having a splash at Singapore Eastern Anchorage
How did it get there? Hideous fish with spikes and humanoid teeth stuck on tree at Punggol Promenade
crocodile
unusual
bizarre
creature
Lim Chu Kang