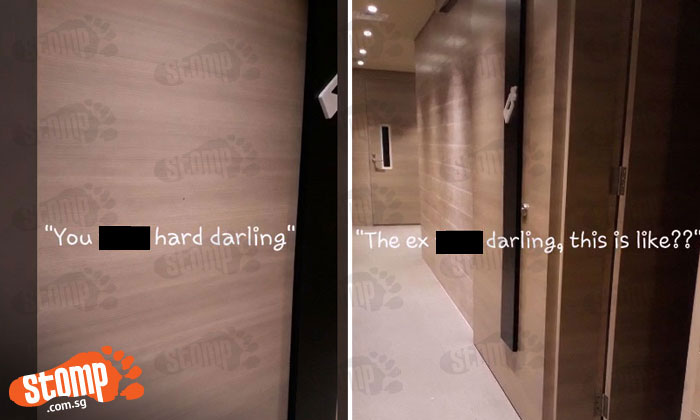 Stomper Chong came across a couple who apparently engaged in sexual activities in a nursing room at Mandarin Gallery on Mar 28 at around 10.50pm.

The Stomper said in an email that the couple was having a 'fun time' in the room meant for babies and their parents. She also reported seeing the man help his partner zip up her dress when they both left.

In a video she sent, the couple can be heard 'getting it on' at a nursing room at the mall.

At the beginning of the rather unappetising footage the Stomper recorded, the woman can be heard breathing heavily.

She then took a few more heavy breaths, before talking to her partner in a way that will probably make you cringe.

From the conversation and sounds, it is apparent that the couple was engaging in sexual activity.

At the end of the video, the man and woman can be seen leaving the premises.

Said Chong about what she encountered:

"Looking at how they are dressed quite decently, I believe they could have easily gotten a room in Mandarin Hotel and not moan so loud in public at night in the nursing room."

Stomp made a trip to Mandarin Gallery and has ascertained that the changing room is indeed at the mall.

The design of the wall, layout of the area outside the nursing room, and the bottle sign displayed outside the door of the room in the video are similar to that of what we observed at level two of the mall.

The couple's act raises questions on hygiene and responsibility. Nursing rooms are meant for babies, and babies need clean and hygienic environments to receive food and care from their parents.

Secondly, based on the video, the couple do not look all that young. At their age, they should be fully aware of the fact that they should not be doing what they did in a public place.

See what the Stomper recorded in the video below. The subtitles in the footage were added by her.