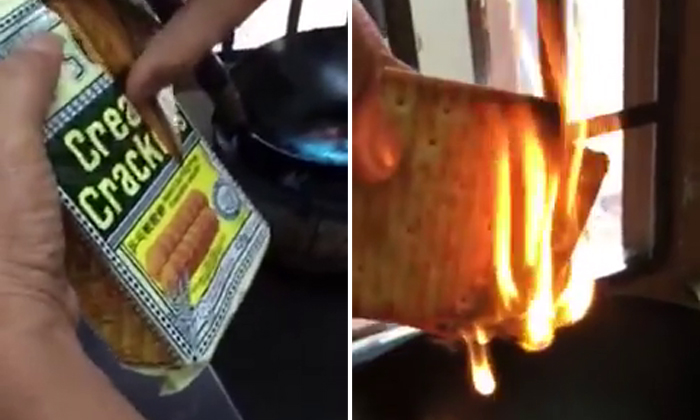 A video showing a man claiming there is plastic in a popular brand of cream crackers has been dismissed by netizens as being misleading.

To prove his point in the video, the man, who spoke in a Malaysia-accented Chinese dialect, used a cigarette lighter to burn a few crackers from well-known brand Hup Seng.

As the crackers lit up easily and appeared to be melting, he claimed that they could have contained synthetic material - insinuating that they were not safe to eat.

Uploaded by Facebook user Emo-Ji early on Friday (July 29), the video has garnered over 730,000 views. It also got many netizens fired up.

They pointed out that a few ingredients in the crackers like oil and carbohydrates, such as wheat flour and corn starch, are in fact flammable.

Some demanded the video to be deleted while others warned the man in the video that he could be sued by Hup Seng for making a false claim.

One Facebook user showed a clipping of a Chinese newspaper article which cited an expert saying that the crackers are safe for consumption.

AsiaOne sent questions in an e-mail to Hup Seng to clarify the matter, but has yet to receive a reply at publication time.

AsiaOne decided to conduct its own experiment using the same brand and type of crackers that were used in the original clip.

However, despite two attempts, the crackers used in their test did not catch fire easily, unlike the ones shown in the questionable video.