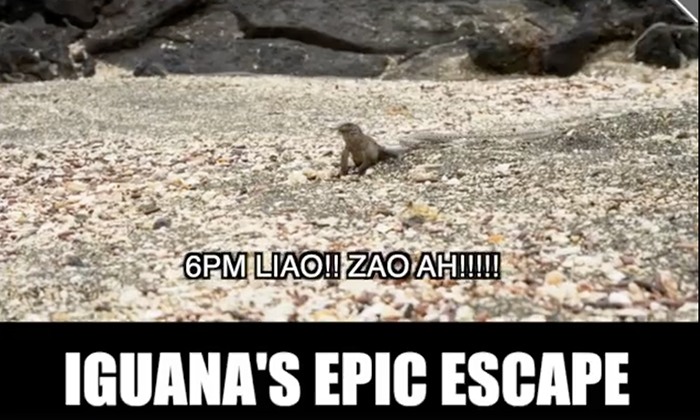 A video posted by the BBC showing an iguana fleeing from snakes has recently gone viral, and this Singaporean man has decided to give the video a local twist.

The short video was posted by SGAG and features a hilarious voiceover in Singlish. The narrator equates the iguana to a tired office worker who just wants to get home.

“This chao keng si ka zhua  is in office waiting for 6pm to pang kang,” the voiceover says as a snake creeps up on the iguana.

As the iguana runs across the plains, the voiceover goes: "“He chiong past the pantry, now he chionging towards the office door, almost make it liao."

The iguana is unfortunately ambushed by snakes, but it escapes.

The video, which was posted on Wednesday (Nov 9) now has over a million views.

Related Stories
Did King Kong climb Block 286 in Bukit Batok? Seems like he left his slippers behind
We've bin doing it wrong: Westwood Crescent private residents 'chope' their parking lot with trash cans and flower pots
As if you can't get enough of the PPAP song... here's the longer version
funny
iguana
funny singapore