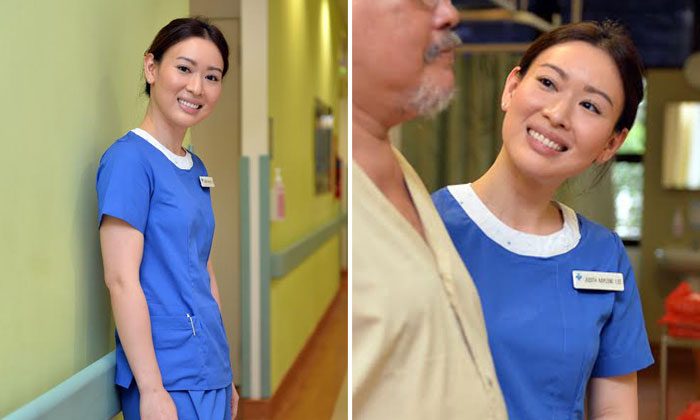 She is so pretty that a patient followed her around the wards and would harass her colleagues about her whereabouts when she was not around.

Male patients and their relatives would also ask for her mobile phone number to ask her out for lunch.

And she has been scouted by modelling agencies at least 10 times.

She is interested only in providing the best care for her patients so they can recover as best they can.

Ms Lee has been a nurse for eight years and has been working at NUH during that period.

She got interested in nursing when she accompanied her family to NUH as a child because her brother suffers from congenital heart defects.

She said the nurses were warm and professional and empathised with her parents' anxiety. She recalled one occasion where her parents accompanied her brother for an MRI scan.

She was sitting in a corner when a nurse went up to her to comfort her.

Said Ms Lee: "The nurses would say, 'It's okay. You just wait here for a little while. Your brother will be coming out soon.'"

That experience stayed with her and in Secondary 2, she realised she wanted to be a nurse.

Her parents were very supportive of her decision.

Being attractive meant she was talent-scouted by modelling agencies many times.

On rejecting modelling scouts, Ms Lee, who is single, said: "I love nursing and I have a purpose. It was quite easy to reject them because I knew that (modelling) wasn't something I liked."

Saying 'no' to patients and male relatives was another challenge.

Ms Lee said: "I did have patients or their relatives who wanted to get to know me, requested for my number, or asked me out for lunch. I never gave them my number.

"I am actually quite fierce. I know how to make things very clear to them and really draw the line, so I don't actually have many of those kinds of encounters."

There are also other challenges, said the Nanyang Polytechnic nursing graduate who later got a Master in Organisational Leadership from Monash University.

Ms Lee said: "Some of my colleagues feel quite upset when family members treat them like maids because, ultimately, some of (us) do have a degree and are actually professionals."

She hopes to change the face of nursing and is heavily involved in the Ministry of Health's Care to Go Beyond campaign, a campaign that tries to recognise the invaluable contribution of nurses and encourage more people to join the profession.

Apart from being featured in print advertisements, Ms Lee plays a mother who inspires her daughter to be a nurse in the television commercial "There's Nothing I'd Rather Be".

She is also filming for a Channel 8 nursing drama, You Can Be An Angel 2 , where she plays an Advanced Practice Nurse alongside stars like Zoe Tay. The drama is scheduled to debut on Nov 1.

In the end, it is the support of her colleagues and seeing her patients recover and walk out of the ward that keeps her going.

Ms Lee said: "At the end of the day, I find great satisfaction in my job, which gives me the drive and makes me want to do better."

"I know how to make things very clear to them and really draw the line, so I don't actually have many of those kinds of encounters."

Nurses' Day is celebrated in Singapore on Aug 1 every year.

This is unlike International Nurses' Day, which is celebrated on Aug 12 (Florence Nightingale's birthday).

Aug 1 marks the beginning of the development of nursing in Singapore, now into its 131st year.

Nurses' Day celebrates the contribution of nursing to Singapore's healthcare system, as well as the hard work and commitment displayed by nurses towards their patients.