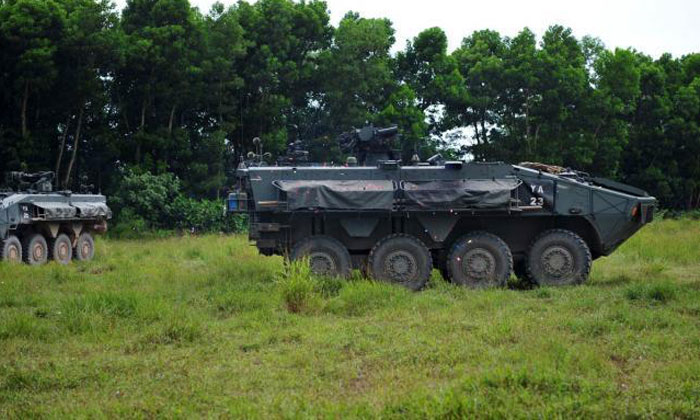 Chinese Foreign Ministry spokesman Geng Shuang said yesterday that China has asked Singapore to "strictly abide by the laws of Hong Kong Special Administration Region (SAR), and co-operate with the SAR government on all necessary follow-ups".

"The Chinese government has always firmly opposed countries that have diplomatic ties with China to have any form of official exchanges with Taiwan, including military exchanges and co-operation," he said at a regular media briefing.

"We ask that the Singapore government strictly abide by the One-China principle," he added.

The SAF conducts overseas training in a dozen or so territories and hires commercial shippers to transport military equipment to and from Singapore.

A report by Hong Kong's FactWire news agency on Saturday claimed that the APL container ship had docked in Xiamen in mainland China before transiting in Hong Kong.

The report claimed that the Hong Kong Customs and Excise Department was tipped off by its mainland counterparts about the nine SAF armoured vehicles, leading to their seizure in Hong Kong last Wednesday.

Neither China nor Hong Kong has confirmed the report.

Citing customs sources, the report said the city's customs authority was told that the vessel did not have "approval notice" for the military vehicles.

It said the shipment was discovered to have contained "undeclared military materials" when it stopped over at Xiamen's Haitian Container Terminals after leaving Kaohsiung in south Taiwan.

Singapore's Ministry of Defence had said earlier that the cargo had "no ammunition or sensitive equipment on board".

It is not known why the Xiamen customs authorities did not seize the vehicles but chose to tip off their Hong Kong counterparts instead.

When asked by The Straits Times about the report at the media briefing on Monday, Mr Geng said he had no further information.

The Xiamen customs department told The Straits Times it was not allowed to speak to foreign media, when asked if the APL ship did not produce the necessary paperwork for the clearance of the nine military vehicles.