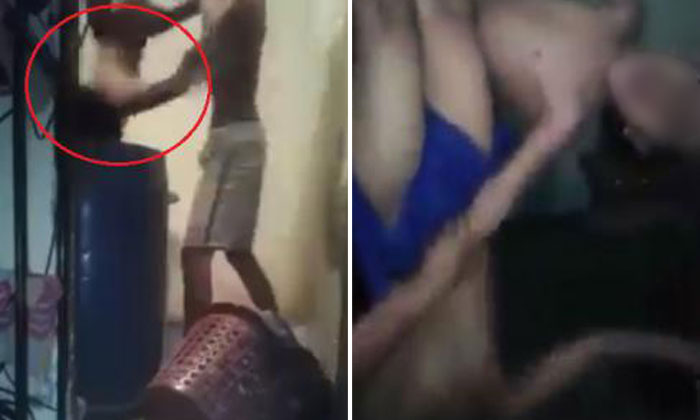 A series of three short clips showing a man torturing two young boys have caused an outpouring of anger on Facebook.

Lasting no more than 11 seconds each, the chilling videos uploaded by Facebook user Siti Nur Suhada Ayub on Saturday (July 23) have been shared close to 12,000 times.

In the first video, a man, dressed only in knee-length shorts, can be seen dunking two young children into a large drum. The whooshing sound of water being stirred violently can be clearly heard as he throws them inside repeatedly.

The second video shows the two boys screaming and crying as they hang upside-down, tied to a door frame by their ankles. A man can be heard shouting at the boys as he canes them mercilessly.

In a third but no less disturbing video, one of the boys can be seen struggling and crying out in fear as an adult chokes him with one hand. Again, a man's voice can be heard over the boy's cries. He shouts at the boy even though the child looks to be in great distress and pain.

In her post, Siti Nur Suhada Ayub wrote in Malay: "Dear God...Soften the heart of this man. So that he becomes a good father and raises his children to be good. And not be like what he is doing here".

It is unclear where or when the videos were filmed as no details were provided in the post.