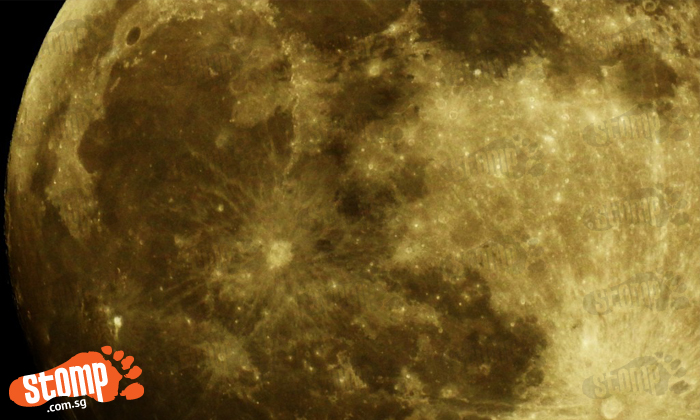 Stomper Kannan captured stunning photographs of the full moon on Aug 17, which is also the 15th day of the seventh lunar month and coincides with the Hungry Ghost Festival.

"The Hungry Ghost Festival 2016 in Singapore takes place every year on the evening of the 15th day of the Ghost Month, which falls on the seventh month on the Lunar Calendar.

"The festival was observed today in Singapore on 17 August 2016.

"In the Chinese calendar (a lunisolar calendar), the Ghost Festival is on the 15th night of the seventh lunar month (14th in southern China).

"The Ghost Festival (also known as Zhongyuan Festival by Taoists or Yu Lan Pen Festival by Buddhists) is the day to pay respects to the deceased by offering sacrifices.

"In Singapore, on this day it also coincide with the full moon which was visible only much later due to an earlier downpour that caused rain clouds to form. After a brief Lunar Corona that formed, the full moon was in its clearest form just after 10pm today.

"Another interesting fact of the Full Moon reveals that some native American tribes called the August Moon the 'Sturgeon Moon' because they knew that the sturgeon of the Great Lakes and Lake Champlain were most readily caught during this Full Moon. They also called August’s Moon the 'Full Green Corn Moon'.

"Managed to capture another beautiful full moon from the skies from Woodlands tonight."

Related Stories
Waterspout spotted at East Coast Park: Check out all the beautiful pictures and videos by Stompers
More About:
nature
sky