Ceiling panel falls in Clementi cinema: "Everyone thought that was special effects" 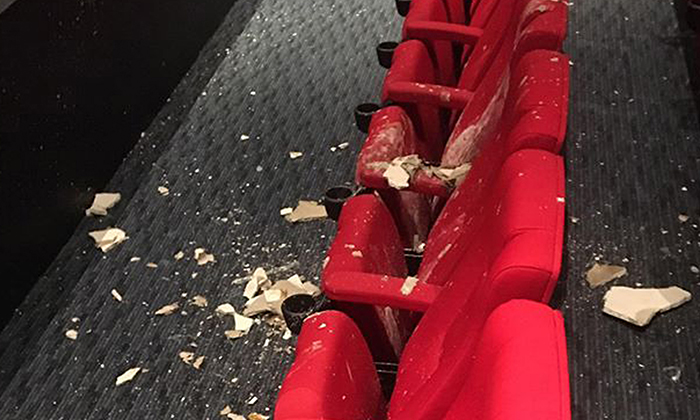 A ceiling panel, that measured about 4 sq ft, fell and landed on an empty row of seats in a Clementi movie theatre around 1pm yesterday.

No one was hurt, but the affected hall is now temporarily closed as a precautionary measure. Other halls at the cineplex are still open.

Editor Alvin Pang, 44, told The Straits Times that he had been watching an 11am screening of superhero film Logan in Hall 10 of WE Cinemas in Clementi 321 mall. Around 1pm, towards the end of the film, he suddenly heard a loud sound.

"Everyone thought that (the sound) was special effects since it was an action movie. But then we saw that debris had landed on the front row," said Mr Pang.

"Thankfully, no one was there. It was unsettling because it could have even killed someone."

There were fewer than 10 people at the screening, and staff members later came into the theatre to inspect the ceiling, he added.

Ms Vivien Ong - sales and marketing director of WE Cinemas' parent company, Eng Wah Global - said that the company is aware of the incident and that its contractors are investigating its cause.

Over the past year, several incidents have occurred in which ceiling boards, cladding or other structures have dislodged from buildings, with many in Housing Board blocks.

Last month, a large slab fell from a kitchen ceiling in a Marine Terrace flat. A 70-year-old woman narrowly missed being hit by the slab.

In January, an 80-year-old man suffered scrapes and cuts after a concrete slab fell from the ceiling of his daughter's flat and landed just next to him.

In November, parts of the ceiling of a lift at Pasir Ris Drive 4 fell and injured two people.