Catch Steven Lim's final BIGO performance before he gets banned 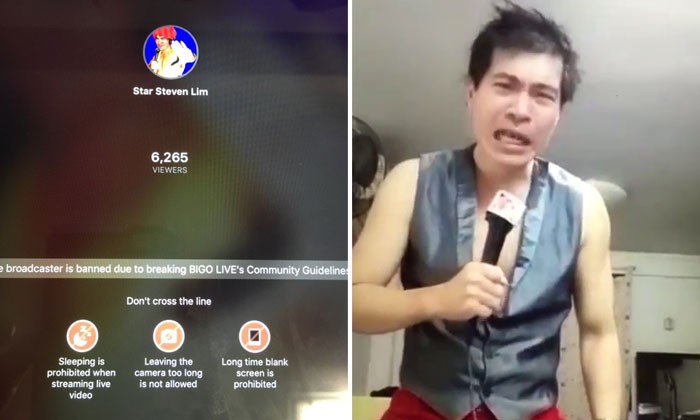 Steven Lim has been banned from BIGO since yesterday (Sep 18) for unknown reasons.

According to a screengrab, he was banned for breaking BIGO LIVE's Community Guidelines which include: Sleeping when streaming a live video, leaving the camera for too long, and leaving the screen blank.

However, if you take a look at the videos on his BIGO stream, you'll realise he did not violate any of the above. In fact, he was actively entertaining his viewers the entire time with his singing, dancing and piano skills.

Is BIGO anti-Steven Lim? With a total of 6,265 views, he must certainly be entertaining his fans really well, so why did they ban him?

"He did not leave the screen what? Why ban him?" One netizen commented on Hardwarezone.

We sure hope Steven Lim's not gone for good on BIGO, we'll definitely miss him.

Related Stories
Singapore teens stream live via new app: Strangers tell them to show off their bodies
I cry when I read bad comments about me: Here's the personal side of 'Superstar Steven Lim' that is rarely seen
Realife: 'Superstar' Steven Lim reads nasty comments about himself and responds to his haters
More About:
online
viral
funny