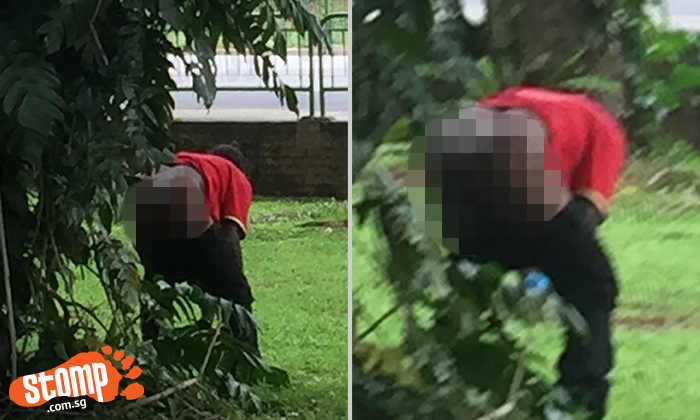 Stomper Salleh witnessed an Indian man who was defecating in public along a stretch of Indus Road, River Valley today (Mar 19) at around 3pm.

Salleh quickly snapped a few photos of the man and sent them to Stomp.

According to Salleh it was not the first time the man had taken a dump in public, and every time someone catches the culprit in the act, he would allegedly smile at them instead of covering himself up.

"He has been doing this for over a year, and sometimes I see him doing so at around 3am to 4am when I'm returning home.

“He waved to me just before I started taking the photos.

“There was a police patrol car nearby which sounded the horn at him, after which, he covered himself and went off.

"There are even open toilets nearby so I don't understand his actions at all."

Related Stories
Gross! Men let toddler poop in public at Compassvale Link when there's a toilet nearby
Guy takes a dump in the middle of train cabin in Shanghai -- but commuters are not bothered
Woman spotted relieving herself at Holland Village MRT station believed to be of unsound mind: SMRT
public defecation
inappropriate
disgusting
inconsiderate