Can they do that? Drivers use cones, bins and clothes rack to 'chope' parking spaces 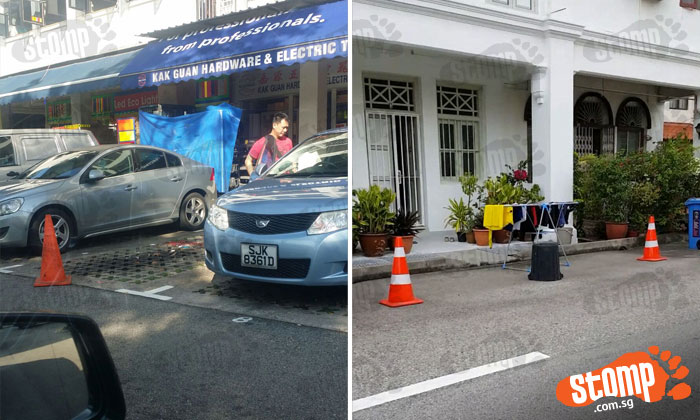 Firstly, a Stomper sent a photo showing an orange cone placed in front of an empty parking lot at Ubi Avenue 1.

He came across the sight at 8.30am this morning (Jan 18) and said that he has been seeing this for more than three months.

In a telephone interview and WhatApp message, the Stomper said that the lot was reserved by a BMW driver who owned a shop nearby.

The parking lot was demarcated by white markers, meaning that it was meant for public use.

The driver however claimed that the lot is allocated for him and will park his vehicle there from 8am to 4.30pm, according to the Stomper.

In a video he sent, dustbins were used to 'chope' spaces in between several parked cars along the road.

Towards the end of the video, there was even a clothes hanger that was used to reserve a parking space.

There were shophouses along Cheow Keng Road, suggesting that the spaces might have been reserved by residents living in the area.

This occurrence was more outrageous than that of the incident at Ubi as there were no demarcated lots or lines on the road, meaning that drivers should not even be parking their vehicles there in the first place.

The actions of the drivers mentioned above are questionable as they may not have the right to claim the parking spaces for their own.

Stomp has contacted the authorities with regard to the incidents mentioned above and will provide updates once we have them.

Related Stories
Cool Mercedes, uncool parking
BMW woman parks in family lot -- but says she has 'a change of plans' when asked why she has no baby carriage
inconsiderate
inappropriate
fail
carpark
parking