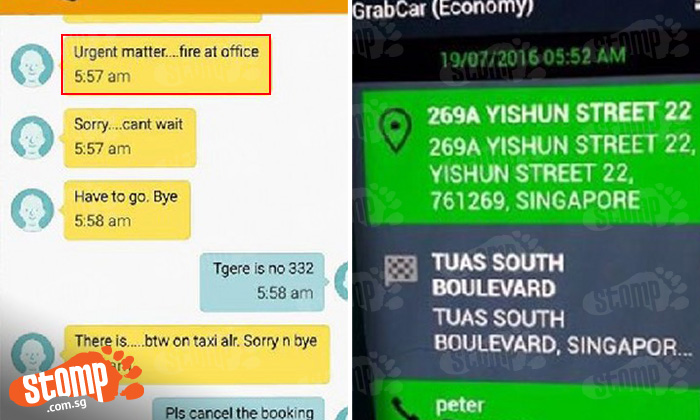 A man who is reportedly a taxi driver is said to be trying to 'make things difficult' for Grab drivers by making fake bookings and bringing them on a wild goose chase.

Stomper Shawn alerted Stomp to a post made by a member of a closed Facebook group 'Uber/Grab SG Partners'.

"His modus operandi is to book Grab rides to far and remote places, but always not boarding and not cancelling, in an attempt to destroy Grab drivers' acceptance rate (AR) and cancellation rate (CR), which will ultimately affect the victim driver's incentives and earnings.

"As this has been happening for a period of time and on numerous occasions, his rider profile is shared amongst many Uber and Grab's FB groups."

In the screenshots he shared, it shows booking destinations all the way to Pulau Ubin and Tuas.

The texts show that when the driver has arrived, he would send him in circles to different blocks, then make excuses that his 'office got fire' and that he could not wait any longer.

Shawn continued:
"According to some postings and sources from various FB groups, he is believed to be a taxi driver, driving the midnight shift.

"Note to all public: Regardless of taxi drivers or private hired drivers, we are trying to earn an honest living, helping commuters to get to places in time.

"So think twice before you decide to pull tricks on others!"