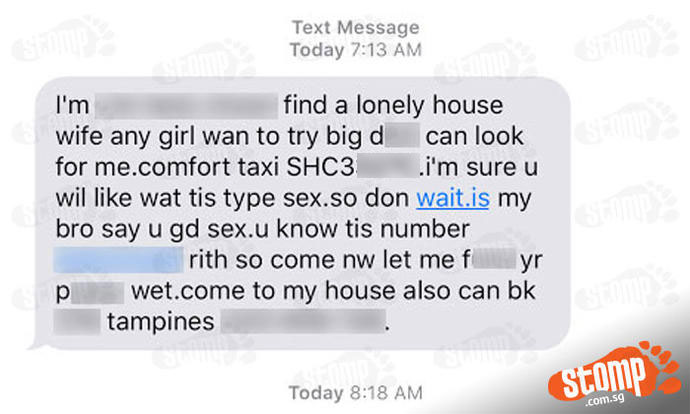 Stomper Pardpardrulesword had a shock after checking her phone when she woke up this morning (Aug 17).

She received a lewd text message from a sender claiming to be a cabby of Comfort taxi.

In the message, the cabby told the Stomper that he was looking for sex with a 'lonely housewife'.

The cabby also mentioned that his brother said that the Stomper provided 'good sex' before ending the message with some explicit language.

The Stomper has replied the cabby saying that she plans to report what happened to Comfort Delgro and Stomp.

Said the Stomper in a telephone interview:

"My father is a cabby too. From what I know, contact numbers of customers will be reflected on booking slips.

"Maybe that was how the sender got my number."

Said a ComfortDelGro spokesperson with regard to what happened:

"The driver in question has made several Police reports as his identity has been used by person/persons unknown.

"As this matter is under Police investigation, we are not able to comment further."

Related Stories
Man says woman 'looks like a prostitute', offers her up to $2,000 for sex
Man 'accidentally' bumps into woman at Singapore Expo -- then targets other girls and does the same
'Incriminating' text messages to be used against 3 youths who gang raped 18-year-old in hotel
25-year-old man asks girl, 19, to be 'friends with benefits' -- and says he will pay her
More About:
inappropriate
sex