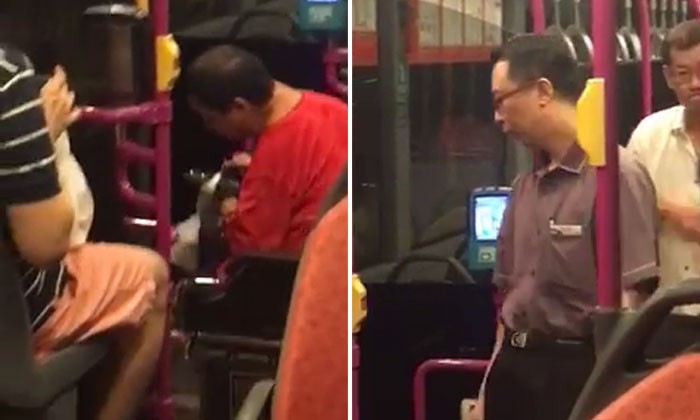 Stomper Tuck Ming alerted Stomp to a video shared by a netizen showing a driver of SBS bus service 135 driving his vehicle at high speeds on Dec 17 at around 11pm despite having a wheelchair-bound passenger on board.

When contacted, the netizen told Stomp that she boarded the bus at Parkway Parade and she noticed that the bus captain was driving very quickly.

When the bus reached a bus stop in Paya Lebar, a wheelchair-bound passenger come on board and made his way to the standing area on the vehicle.

Despite his presence, the netizen said that the bus captain continued driving at a high speed.

Around five minutes after he boarded the bus, the wheelchair-bound passenger signalled his intention to alight.

The bus captain helped to deploy the ramp, but did so rather unhappily. A loud thud can be heard at the ramp hit the kerb at the bus stop.

Another passenger on board who was looked to be displeased with what was going on voiced his opinions to the bus captain, but the latter had no reaction.

The netizen took a live video of what happened and shared it on her Facebook page.

In the video, she can be heard narrating her experience on board the SBS bus. She also took shots of the road to highlight the speed at which the bus was travelling.

"The bus captain thinks that he is a racer."

Related Stories
Look how close motorcyclist comes to being knocked down after making reckless turn
Drunk or sleepy? Van driver sways from side to side and keeps jamming on brakes on BKE
SBS bus
reckless
speeding
dangerous