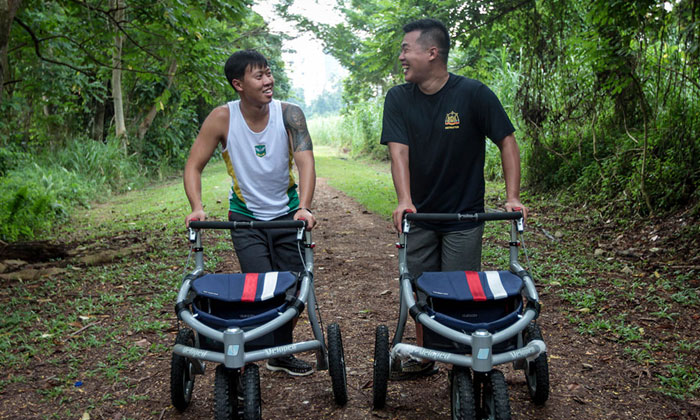 In 2011, ultra-marathoner Eugene Tan completed a gruelling 100km marathon, The North Face 100, which is deemed as one of the toughest races in the region.

He took 16 hours to complete the race. With him was his elder brother and triathlete Kenneth, who never left his side; pedalling on his mountain bike with water and nutrition packs in tow.

“Let them cut you off, don’t cut yourself off from the race,” Kenneth had said when Eugene was on the verge of giving up.

Among the 41 runners who took part in the race, only 23 completed it. Eugene was one of them. He came in 14th.

At the height of their racing careers a few years ago, the brothers had no qualms covering distances and even mountains.

Today, both Eugene and Kenneth can't even walk 10km without assistance.

Kenneth, 28, and Eugene, 26, were diagnosed with Hereditary Spastic Paraplegia (HSP) in 2014, a rare genetic neurological condition which affects the transmission function of the spinal cord. This, in turn, impedes mobility in their lower limbs.

The condition also causes their quadriceps and hamstrings to contract at the same time, resulting in stiffness and the inability to walk efficiently. Typically, one would contract and the other, relax, during movement.

Kenneth likened the weakened sensation to the soreness one experiences after completing a marathon, when the muscles don’t function optimally.

“Movements are slow and when you see an obstacle, your legs might not be able to react in time. Basic things like walking up the stairs takes a lot of concentration; looking at every step, and physically putting your foot on the next step.”

The condition is not a single disease, but a group of symptoms that can be caused by a variety of genetic neurological diseases, explained senior consultant Dr June Tan at National University Hospital’s Division of Neurology.

The condition may be hereditary, but Dr Tan further explained that in some cases, parents may be carriers and pass on the genes to their children without manifesting the condition themselves.

In the brothers’ case, the condition has been latent in their family history, until now.

The rate of deterioration is also unique in individuals, and Kenneth, being diagnosed first, exhibits a more serious infirmity than Eugene.

As members of the Outdoor Adventure Club in Catholic Junior College, the brothers were part of a dedicated group of mountaineers who ran 5km on the school track at the crack of dawn daily.

Their zeal for adventure continued in the Singapore Armed Forces (SAF) when they enlisted for national service.

Kenneth entered the Naval Diving Unit where he eventually signed on as a naval diving officer, while Eugene was drafted to the Singapore Armed Forces Commandos Formation.

It was a cruel twist of fate that the brothers first discovered their condition while training for the yearly Individual Physical Proficiency Test (IPPT), a mandatory annual fitness test for SAF personnel.

Kenneth recounted: “I used to be an avid cyclist and adventure racer. But when the time came for me to take my IPPT, I realised I had some problems running.”

“I failed my IPPT, which has never happened before, because I got gold all my life. When I failed, I was shocked,” Eugene said, adding that he decided to take a two-year hiatus from running. Instead of recuperating, his legs started to weaken progressively.

Connecting the dots led to a nagging suspicion that it was more than just a passing muscle fatigue.

“The family actually got together and cried quite a bit,” Kenneth said grimly, recalling how his parents, both 61, had to grapple with their only children suffering from the rare condition.

For Eugene, a Nanyang Technological University (NTU) Sports Science and Management graduate, his entire world came crashing down when he was diagnosed in 2014.

“Running was my life, you see. I used to run so much. I used to tell people, the only time my girlfriend can spend time with me is running with me,” he said.

“Suddenly, this was taken away from me.”

Eugene turned to various avenues to escape reality, such as trying to build muscle mass for fun and eating more to put on weight – silly antics he said that his girlfriend, Tan Ci Hui, unreservedly put up with.

For Ci Hui, 24, standing by Eugene wasn’t a difficult decision. She said: “I don't think the disease changes the person he is fundamentally, so to me, it's not much of a difference.”

The couple has been dating since 2011 when there were schoolmates at NTU and their five-year relationship has been unwavering to say the least.

Ci Hui added: “Whenever we go for walks, I just take note not to walk too quickly since he can't walk too fast now.”

“It's the little things I try to note in order to be sensitive.”

Kenneth, who first received the news of his condition in 2013 and officially diagnosed in 2014, was stumped once he realised he could no longer excel in the adventure-racing world.

A double whammy came when the navy offered him an appointment doing administrative work or the option to leave the service.

He opted for the latter as he had signed on to be a naval diving officer, and things took a downturn after that.

“After I was diagnosed, I slipped into depression,” Kenneth said, “I put on quite a bit of weight. I wanted to just escape from the world, so that was a very negative change.”

Wary that Kenneth might spiral further into the dark abyss of depression, his navy buddy and race partner Nicholas Yeo kicked into action.

“To someone like Kenneth, a naval diving officer who has a bright future in his career - an avid cyclist, an athlete, a triathlete, an adventure-racer, HSP is worse than death,” said Nicholas, 28, a tax consultant.

“It seems like someone played a huge joke on him, not only taking away his legs, but also his career and the ability to do everything that he loves.”

Wanting to fulfil Kenneth’s dream of completing one more race before his legs give out, Nicholas contacted their former coursemates from the 27th batch of Naval Divers to join the SAFRA Bay Run in 2014. One even flew home from Australia for the race.

Like so many other races before, Nicholas and Kenneth crossed the 10km finish line together - this time with their band of brothers in tow.

The message was clear: “Even when he falls, we will wait for him, and walk with him until the finishing line,” Nicholas said.

It was certainly a turning point for both Kenneth and Eugene, who knew then that their lifelong battle against HSP was a fight they didn’t have to face alone.

With spirits on the mend, Kenneth then decided to channel his energies into art, a childhood passion that took a backseat to sports years ago. He began painting and delved into clay modelling, calming activities that have inspired him to pursue a Masters in Art Therapy.

Meanwhile, Eugene, a former bartender, has quit the nightlife to apply for a Masters in Physiotherapy in Australia.

The brothers hope to use their experience and knowledge in these fields to help others in the same situation.

Although walking or climbing the stairs now takes a few painful minutes longer, Kenneth and Eugene refused to hang up their running shoes.

“Doctors that we consulted recommended physiotherapy to slow down the chances of any further degradation of our legs,” Kenneth said, pointing out that this was a mode of treatment he and Eugene could handle on their own without incurring hefty medical expenses.

With Eugene’s knowledge in sports sciences, the brothers developed a weekly routine that includes strength-training at least thrice a week in the gym and long walks twice a week.

In September this year, the brothers started Mountain Tortoise, a Facebook page to document their training progress, as well as to spread awareness of living with mobility impairment.

“It also serves as a benchmark so that we don’t go below what we achieved last week,” Kenneth said.

To date, the page has garnered about 1,200 likes, mostly from friends and supporters from the ultra-running community.

With Mountain Tortoise, the brothers hope to reach out to people suffering from mobility impairment and to even inspire regular people to lead a healthy lifestyle.

HSP may be a rare condition, and the odds of having two afflicted persons in the same family are downright cruel. But to the brothers, it has only drawn them closer.

Kenneth said: “I would say that my biggest takeaway from this condition is that the focal support group can just be next to you. It comes from my brother, who understands me a lot better. Our parents have also been very supportive of whatever we do.”

With a long and illustrious history of sporting achievements between them, Kenneth and Eugene have no plans on discarding their fitness goals.

Eugene recently completed a 26km walk along the East Coast and Changi Coastal Road stretch to mark his 26th birthday on October 14.

He also has his sights set on summiting Mount Rinjani, a volcano in Lombok, Indonesia, a feat he remarked, that could have been achieved easily a few years back.

Mellowed but not muted, the brothers intend to continue racing.

Resilience, determination and endurance are essential traits every good sportsman should have. The brothers are clear exemplifiers, especially on their most challenging race to surmount this disease step by step.

Eugene said: “One day I wish to join a race and not be cut off. That will be best. I just want to walk far again, I don’t know if I can ever do it.

“I just want to walk an ultra [marathon] again and I’m going to drag my brother through it.”