Boss of Evolve MMA spends $500,000 on Maldives vacation for employees 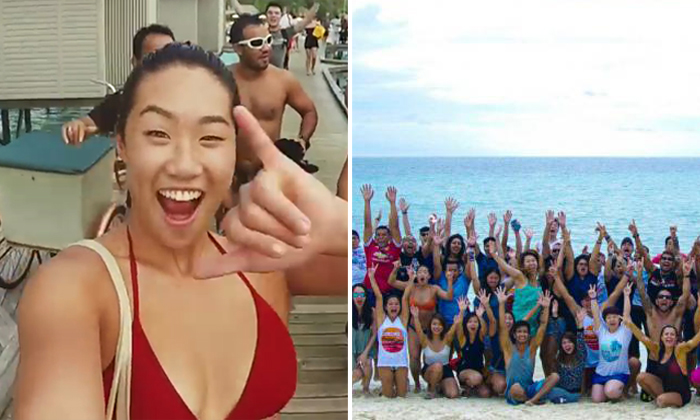 As the economy heads into a massive slowdown, many employees find themselves being grateful to have a job and few are bold enough to even think of bonuses and company-paid retreats.

But while 2016 has been a challenging year for businesses all around the world, local martial arts company Evolve Mixed Martial Arts has been defying the odds and experiencing bumper growth instead.

According to founder and chairman Chatri Sityodtong, Evolve has been registering approximately 30 per cent year-on-year growth throughout 2016, on top of "strong double-digit growth every year."

In fact, the company did so well in 2016 that Sityodtong recently spent $500,000 just to reward more than 100 employees with an all-expenses-paid trip at a five-star luxury resort in the Maldives.

Members of Evolve's fight team, including ONE Women's Atomweight World Champion Angela Lee, were joined by the company's support staff and world champion trainers on the trip.

Sityodtong, a serial entrepreneur, told AsiaOne that rewards such as the Maldives trip were nothing out of the ordinary at Evolve MMA.

Calling the annual retreat a "normal part of the Evolve culture", Sityodtong said that such rewards were "a small token of my heartfelt gratitude to all of the phenomenal rockstars at Evolve MMA".

"Every year, I take the entire team on an all-expenses-paid trip to a five-star luxury resort at a surprise destination," he said, adding that the company has been organising staff retreats for the past five years.

Past retreats have seen employees vacationing in popular beach getaways such as Bali, Krabi, Khao Lak, and Bintan.

Not only is Sityodtong willing to splurge on employees, but there is also an admirable deeper meaning to the incentive trips that Evolve organises.

For members of the staff that come from environments where luxury vacations are beyond reach, such trips are a dream come true.

Calling himself a "servant leader", the businessman says he can help to serve his employees' needs by fulfilling their dreams.

"Many of my staff would love to travel the world, but do not have the means to do so. The vast majority of my team at Evolve come from humble backgrounds of poverty, tragedy, or adversity. For them, Evolve is the greatest opportunity to escape poverty and to achieve the life of their dreams.

"The best deserve the best. It is only fair. We do our best to hire the best people in the world, giving out only one job offer for every 200 applicants. So they should be compensated as such. We work hard, and we play hard," he said.

It is not difficult to see why Evolve's staff remains motivated, and that is why Sityodtong says he is always optimistic about the firm's performance every year.

"Evolve has the best team in the world," he states without hesitation. "I am very confident in my team. I believe in them 100 per cent."

And while he has not planned their next destination yet, the generous boss of a growing team says: "The world is a big place! I don't know where our annual retreat will be held next year, but I hope to take them to another spectacular place."

Related Stories
My boss lets me use the toilet only twice a day, and other shocking revelations from S'pore employees
15 bosses confess the very questionable things they do at work
travel
heartwarming
mma
evolve mma
boss
generous boss