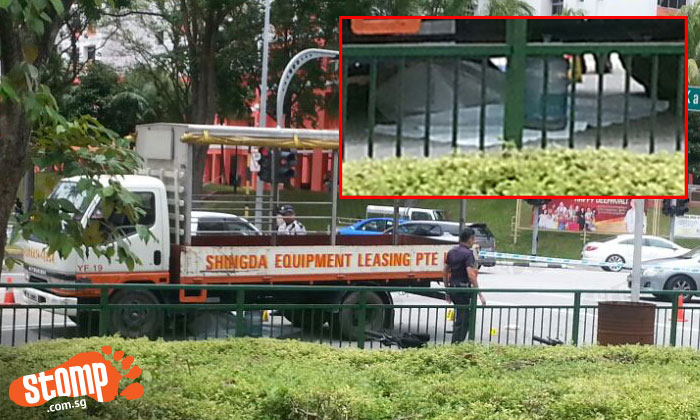 A police spokesperson has released a statement with regard to the incident:

"Police were alerted to an accident involving a lorry and a pedestrian at the junction of Choa Chu Kang North 5 and Choa Chu Kang Street 51.

"A 71-year-old female pedestrian was pronounced dead by paramedics at the scene.

"The 30-year-old male driver was arrested for causing death due to a rash act.

An elderly woman in her 70s died following a road accident at Choa Chu Kang Street 51 today at around 12pm.

A Stomper who was at the nearby Limbang Shopping Centre reported hearing a loud bang when the accident took place.

She told Stomp in a telephone interview:

"I heard from passers-by that the old woman was hit by a lorry that was coming from her right as she was crossing the road.

"At that time the traffic light was showing the green man. She and a few other pedestrians were on the road when the accident happened."

Photos the Stomper sent shows the victim's body underneath the lorry.

The area around the vehicle was cordoned off by Police.

When contacted, an SCDF spokesperson said that they were alerted to the accident at around 11.55pm.

They dispatched one fire engine, one Red Rhino, one ambulance and one support vehicle.

The woman was declared dead at the scene by paramedics.