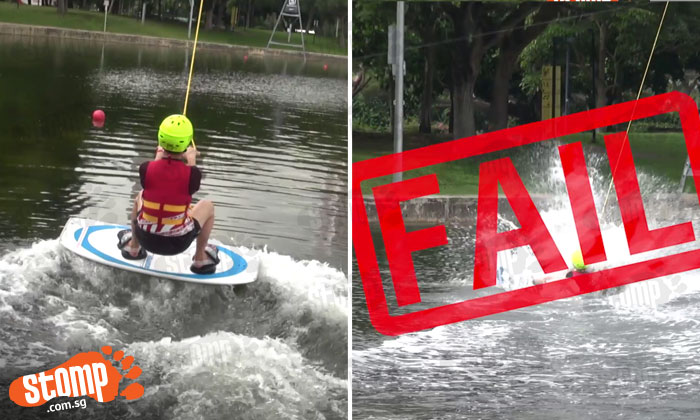 Cable skiing is a form of water skiing, in which the skier's rope and handle are pulled by an electrically-driven cable, in contrast to traditional water skiing which is pulled by a motorboat.

Stomp content producer CK was fortunate enough to be invited by Singapore Wake Park to have a go at the sport.

Putting on his tighter than usual life vest while lamenting his prior laziness in learning how to swim properly, he bravely took a leap of faith into the cold, salty water.

His first and second attempt were over in less 10 seconds, falling over before reaching the first buoy.

Apparently, the sport was harder than it looked.

"Keep your toes pointed up, knees bended, arms locked and try to get to a squatting position before the cable pulls you off the platform," the instructor advised.

On his third attempt, he managed to assume a standing posture before plunging into the pool again.

Deciding that he had gotten a hang of things, CK went on his fourth and final attempt,  standing and nearly completing the full length of the course before once again toppling over.

Asked about his experience, the avid non swimmer said: "It’s definitely fun but not as easy as it seems. There’s this indescribable thrill of gliding on the waters at such a fast speed."

Rates start at SGD $40/hr on weekdays and $60/hr on weekends. Full day passes are available as well.