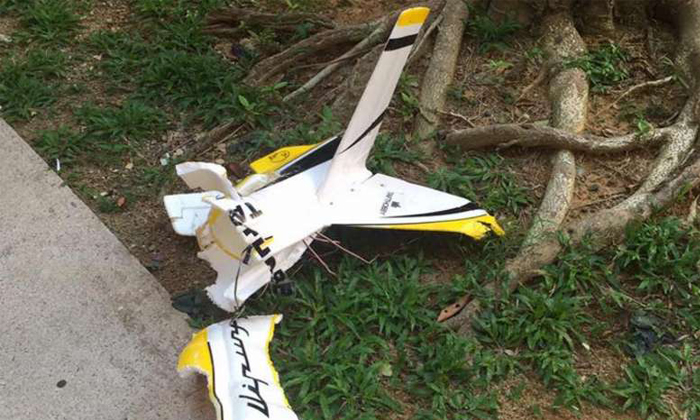 Residents got a scare on Friday (Sept 16) evening, when a model aircraft smashed into the roof of a housing block near Bishan Park.

The model plane crashed through the roof, leaving a hole about 15-cm wide, before plummeting to the ground and breaking up, Chinese evening daily Shin Min Daily reported.

One resident, whom Shin Min named as Zhang Yi Hui, said that there was a loud noise at about 5pm. The 16-year-old student initially thought it was a case of high-rise litter but then saw the model plane debris on the ground.

Non-Constituency Member of Parliament Daniel Goh, who lives in the area, also posted photographs of the damage on his Facebook page. He wrote that he heard the noise and went downstairs to investigate.

"I went down and a neighbour who called the police said, lucky it didn't crash into someone's windows," Dr Goh wrote.

"Others said lucky (it) didn't smash into the parked cars, just metres away, or into any pedestrians or kids playing at the void deck."

He added that a woman was nearly hit by the falling roof tiles.

The police confirmed that they have received a report about the incident.

Unmanned aircraft, commonly called drones, are regulated in Singapore by the Unmanned Aircraft (Public Safety and Security) Act, which took effect in June. The law allows the use of unmanned aircraft that weigh less than 7kg, with a permit required if they are flown in certain areas.

Related Stories
Jalan Bukit Merah residents camp outside their own house for over a week -- and even install own fan and lights
More About:
scary
HDB
plane