Biker hurls vulgarities at woman and calls her 'bas***d': But surely he must have a reason for getting so angry? 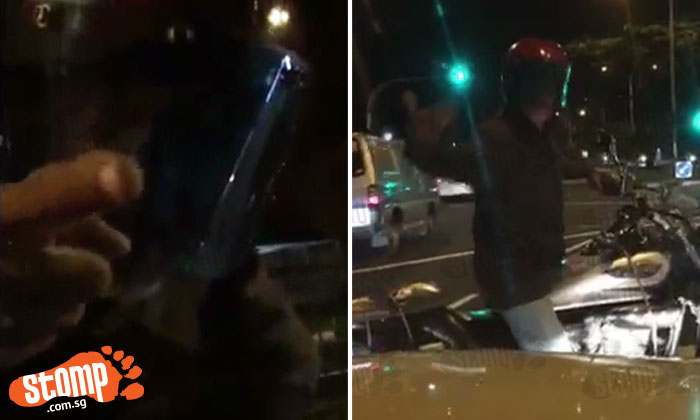 A woman captured a biker on video blocking her way on Hougang Avenue 3 on Nov 17 and shouting at her, calling her 'bas***d'.

Although his behaviour was uncalled for, he probably would not have reacted in such a manner for no apparent reason.

In the video, he repeatedly calls the driver a 'bas***d' after saying that she almost 'killed' him.

He then threatened her to drive off despite his motorcycle blocking her way.

According to Vimala, the rider chased her across four traffic lights and repeatedly verbally abused her.

The woman does not believe she did anything to incite the rider to act so aggressively:

"I neither spoke a word nor gestured in any way to this rider, and my only "communication" with him was the filming of his vulgar behaviour."

If you are the motorcyclist in the video please contact us via WhatsApp at 9384 3761 or email us at stomp@stomp.com.sg to tell us what exactly happened.

Related Stories
Are they both in the wrong? Woman hits taxi after cabby stops really close to her at Hougang Ave 4
Driver sounds horn at, chases and stops woman who made reckless turn
This is what happens when you deliberately speed up to prevent fellow motorist from overtaking
dispute
road rage
rider hurls vulgarities at woman