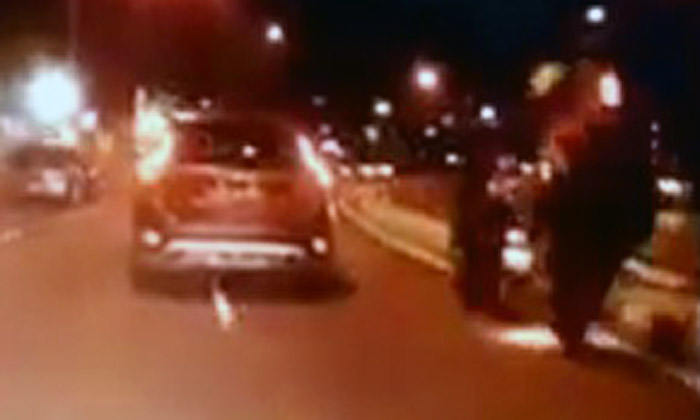 A biker who posted an appeal for witnesses to an accident, blaming a driver for it, ended up getting slammed by netizens who uninanimously agreed that the crash was the rider's fault.

The clip and appeal, posted on Beh Chia Lor - Singapore Road by Dominique Fahmi, has become a talking point online.

The video has since been taken down from the Facebook page.

It shows a car driver making a lane change at Woodlands Avenue 2.

This forces a biker on the right-most lane to brake to avoid a collision.

However, Dominique Fahmi, the biker who posted the clip and appeal, comes speeding behind these two vehicles, and is forced to make and emergency brake.

However, this action locks his front wheel, and sends his motorcyle flipping forward.

The biker, his pillion rider and the bike crash onto the road with significant impact.

Said Dominque Fahmi in his post: "I was involved in an accident with my wife who was my pillion rider on 09/12/16 at about 0000hrs.

"I have a video sent in to me by a witness, which I was hoping to post and find the rightful owner of the car to be responsible.

"And to make others aware of this reckless driver."

Related Stories
Driver makes abrupt lane change and sends motorcyclist flying at Mandai Road
Biker sent flying after crash on PIE, then gets run over by another rider
Motorcyclist sent 'flying' off bike after ramming into car that suddenly changed lanes on SLE
biker flips over in accident