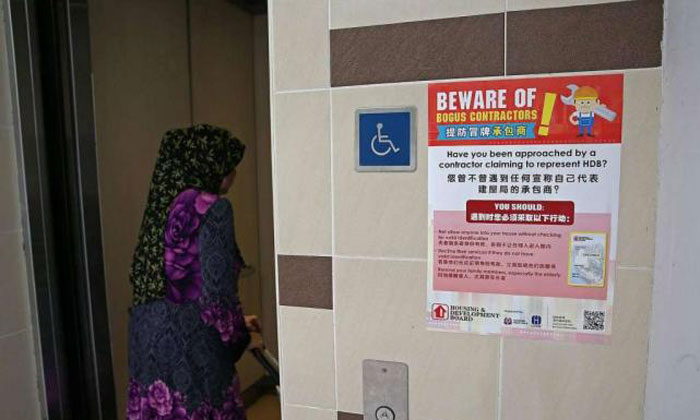 An old woman answers a knock on her door, sees someone who claims to be a Housing Board contractor and ends up paying for a renovation job that she does not need.

Bogus contractors have been targeting elderly people in public housing estates, telling residents that they have been appointed by the HDB to carry out repair works.

"These bogus contractors tend to target the elderly and operate mainly during office hours, when the elderly are likely to be home alone," said an HDB spokesman in response to queries.

Some even use pressure tactics, claiming that HDB will take action against them if the works are not carried out, she added.

Some fake contractors also appear in estates with ongoing upgrading or construction works to solicit business from unsuspecting residents, the HDB said.

To tackle this problem, the statutory board has worked with the police and the Consumers Association of Singapore (Case) to issue warning posters around the island.

About 2,000 of them have been put up since March, and are displayed at all the 21 HDB branches, as well as at blocks where the imposters are likely to strike.

These include newly completed developments, blocks undergoing upgrading and blocks where complaints have been received.

Consumer watchdog Case said it has received 52 reports of such cases since 2013. The police were informed of 10 cases from 2012 to 2014. A spokesman said figures for the past two years are not readily available. Last year, however, police arrested nine people from a renovation firm suspected of passing themselves off as government representatives to get business.

Such cases are considered "cheating by personation". Those found guilty face up to five years' jail and/or a fine.

"We do see some contractors closing down and setting up a new business after being flagged... with the same modus operandi," he said.

He pointed out that when a company closes down, it makes it harder for a customer to get his money back or even locate the contractor.

Consumers should be vigilant and confirm the authenticity of any contractor before engaging their services, Mr Seah said.

The HDB said residents will be given prior notice if works need to be carried out in the flats. Genuine officers are also issued with a staff card bearing their photo. Residents are advised to request identification documents for verification.

"Do not commit to anything on the spot and always take time to respond to the contractor," said Mr Seah. "Do not make any payment such as deposits until and unless the HDB office confirms that such renovation is a requirement specified by them."

Related Stories
Man spent 2 years and $10,000 on bogus degree
Bomb scare in Ipoh turns out to be hoax
scam
elderly