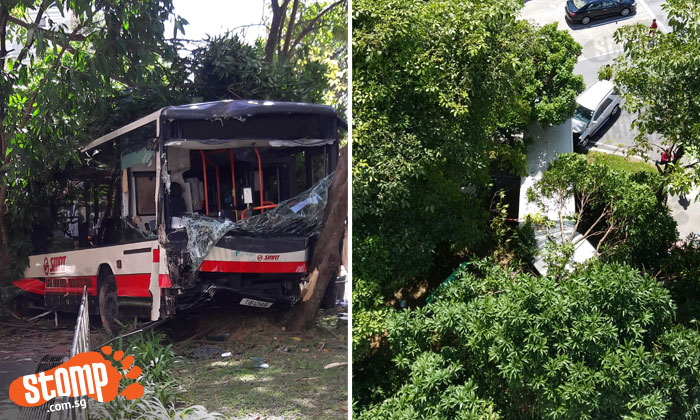 A bus was left badly damaged after an accident with a car at Choa Chu Kang Drive next to Block 689B.

From the photos, the impact from the crash appears to have forced the bus onto a grass patch and for it to collide into a cluster of trees.

The windscreen appeared to be completely shattered and the bus seemed to have sustained damages to its side as well.

"I don't know how it happened but the bus is seriously damaged. Hope the passengers are ok."

This is the second accident involving a bus that has happened this weekend.

Yesterday, Stomper Clorisa sent a photo to Stomp of a bus with a cracked windshield at Punggol Park.

A police spokesperson provided Stomp with the following information:

"On Jan 8 at 2.06pm, the police were alerted to an accident involving a bus and a car at the junction of Choa Chu Kang Drive and Choa Chu Kang Crescent.