Bedok South fire: Retiree's flat destroyed after he tried to put out flames with water 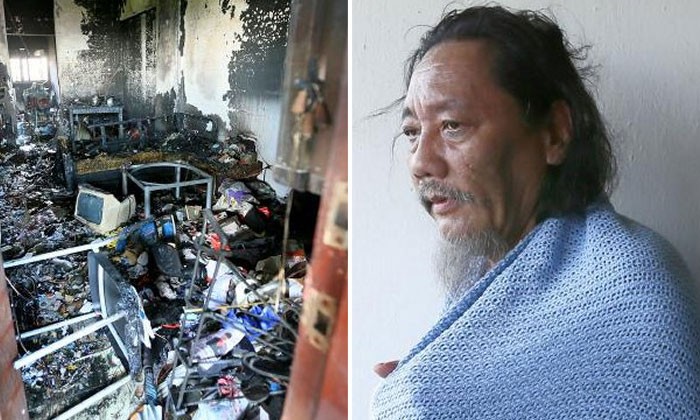 A retiree's flat was destroyed after the fire at Block 38 Bedok South Road on Tuesday (Oct 11)  around 2.40pm, which Stomper Jonas alerted Stomp about.

The fire also caused an elderly to be sent to Changi General Hospital as she complained of short breaths.

It was extinguished with just one water jet but it has caused colossal damage to a retiree's home.

The retiree only wants to be known by Mr Jack.

He is in his 50s and he lives alone in the two-room Bedok South Road flat which has been a home to him for eight years.

According to The New Paper, Mr. Jack saw sparks coming out of his computer and cables as he entered his room.

He tried to put out the fire with water but his actions did not make the situation any better.

His flat was then engulfed in flames.

Neighbours mentioned how there was at least one explosion.

Mr Jack was spotted outside his flat when TNP arrived on the scene.

He was wrapped in a light blue blanket and his face was covered in soot.

Despite being reluctant to divulge any information regarding what happened, he eventually told TNP that his phone service was bad and so, one of his neighbours had to call Singapore Civil Defence Force (SCDF).

He added, "I had no fire fighting equipment so I had to use water to put the fire out.

"I'm trying to call my family and my phone service provider, but nothing is going through."

His neighbours sprang into action when they realised there was a fire.

A 14-year-old secondary school student, Nur Saifullah Danish, who lives three doors down from Mr. Jack, saw smoke billowing out of the flat from his bedroom window.

He said: "I was lying on my bed watching YouTube videos, about to fall asleep when I smelt something burning.

"After I saw the fire, I told my two aunts and my mother to quickly evacuate our flat with my baby brother."

After his family members had left, he quickly went down to the 11th-storey to alert the neighbours to the fire.

Saifullah said: "There was a loud explosion from the flat. He then went into the lift and sat down without moving. I think he must have been overwhelmed."

TNP understands from Mr Jack that the Housing Board will be placing him in a temporary rental flat.

After the fire was put out, Mr Jack was seen sitting at a bench by the roadside in clean clothes.

He said: "Everything is gone. Nothing can be salvaged. All of my memories and valuables are just gone."

Watch the video by TNP below:

Related Stories
Fire breaks out in rubbish dump near Block 27 Marsiling Lane
Toa Payoh resident thought she forgot to turn off gas -- but turns out to be raging fire at coffeeshop downstairs
Old Airport Road Food Centre fire: They heard explosions and a scream
More About:
fire
building on fire
elderly