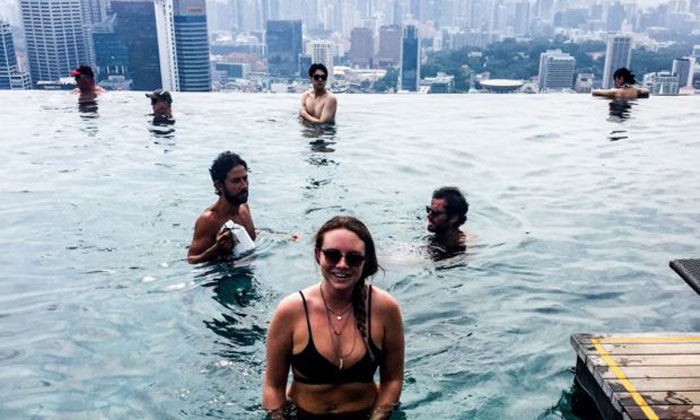 Some backpackers touring Singapore have found a new "challenge" and "adventure", and they are sharing their experiences online.

These backpackers sneak into Marina Bay Sands (MBS) with one aim in mind - to get to the iconic infinity pool at the hotel's Sands SkyPark.

But what they are doing, which has been going on for several months now, could be illegal, lawyers tell The New Paper on Sunday.

Located on the 57th storey, the infinity pool is the highest and largest in the world.

It is featured in travel brochures and websites as well as social media platforms such as Pinterest. But it is accessible only to hotel guests, according to the hotel's policy.

This reporter spoke to two tourists who managed to sneak into the pool this year by pretending to be hotel guests.

They did so on separate occasions, and their modus operandi included taking bathrobes from unattended housekeeping carts and fooling the hotel staff at the pool's entrances.

To prevent copycats, TNPS will not be providing full details of their misdeeds.

Miss Kimberly Connor, 24, who travelled here in February, admits she knew she would be breaking a few laws and that the idea "terrified" her.

The US citizen says: "Scenes flashed through my head - going to a Singapore jail, having to pay a fine heftier than the price of a room, or any of a million other things.

"But I am quite the daredevil, and I enjoy getting into mischief like this."

Miss Connor could not afford a room at MBS, which starts from $500 for a night.

Instead, she stayed at a hostel, which cost $30 a night.

But she was determined to swim in the infinity pool.

She says: "I did feel bad (for lying to the staff). But I thought that one little me being added to the entire pool deck of hundreds of white robe-laden guests would not make that much of a difference."

Her blog post is not the only one detailing the process of sneaking in.

A Google search revealed several videos and forum discussions about sneaking into the pool.

Last month, Canadian Emma Balmforth, 27, managed to sneak into the pool twice after she was "inspired" by Miss Connor's blog post.

Miss Balmforth says she had come to Singapore primarily to carry out her plan of swimming in the pool without paying for a room.

The travel writer says: "I was concerned that I could get into trouble because I did not know what kind of trespassing laws Singapore has.

"Then I overheard two girls at my hostel planning the same thing and decided that it must be quite common for people to try."

The two girls were unsuccessful in their attempts, Miss Balmforth recounts.

"One told me she was escorted into a room and interrogated by a police officer," she says.

"I did not think wanting to swim in the world's most beautiful pool was a crime. That was why I went for it."

But the hotel disagrees.

An MBS spokesman says the hotel "will not hesitate to take appropriate measures" against individuals who are caught trying to trespass.

The spokesman says: "These may include reporting and handing such persons to the police, as well as barring them from the property.

"We would like to remind all visitors that access to the infinity pool is strictly for hotel guests and remains an exclusive privilege for guests staying on-property."

Their methods may be illegal

Watch out - by pretending to be guests and accessing a private property without permission, these travellers might have broken several laws, say lawyers.

Chief among them is trespassing, which the hotel can use to take action against these uninvited tourists, says police investigator-turned-lawyer Luke Lee.

"Trespassing is a civil tort, and the hotel has the right to evict them. In this case, the police will not be involved," he says.

"However, if they cause a nuisance or do anything harmful, it can potentially be criminal trespass, and the police can arrest them."

Criminal trespass carries a maximum penalty of three months' jail and a $1,500 fine, according to the penal code.

Also, taking bathrobes from the housekeeping carts can be considered theft even if one returns the items later on, says Mr Lee.

"Let us say that if you enter a golf country club by pretending to be a named member, that would be impersonating the person," he explains.

By appropriating someone's identity, such as a named hotel guest, the law carries a heavier penalty of up to five years' jail and a fine.

Related Stories
Here's how this US girl has travelled around the world -- for free
S'porean couple and 6 kids go on 6-month US road trip -- without staying in any hotels or motels
27-year-old Chinese woman travels to 90 countries in 9 years on tight budget
More About:
tourists
travel
singapore
illegal