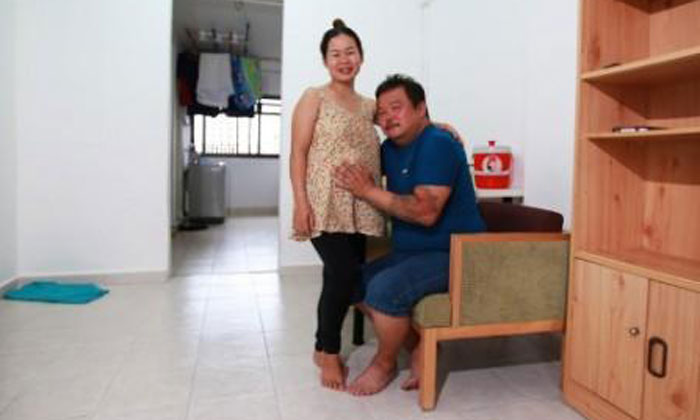 A couple who lived in a lorry for two years because they could not afford to rent a flat have welcomed a newborn son into their lives, a report said.

Rice delivery man Ong Poh Hwa and his Vietnamese wife had made the news because they weathered the elements in the lorry Mr Ong drives for work.

His wife, Ms Nguyen Thi Phu Vinh, 34, was pregnant and the birth was due in August, said a Straits Times report in March.

In April, the couple moved into a temporary two-room flat in Bedok North, which the Housing Board agreed to rent to Mr Ong after he made a commitment to buy a home after his son was born.

Ms Nguyen gave birth on August 17 to a healthy baby boy who tipped the scales at 4.07kg, Lianhe Wanbao reported on Thursday (Sept 8).

The baby has Singapore citizenship as he was born here.

"I hope my wife can become a citizen or a permanent resident soon. Then we can buy an HDB flat, and build a stable family," he said.

Mr Ong, 44, told Wanbao that he cannot wait to get home each day to see his son and wife.

He now packs homecooked food for lunch and dinner so he can save up for additional expenses such as diapers and medical fees.

Earlier, Mr Ong would park his lorry at Changi Beach where he and his wife used public toilets to do their laundry and take showers.

They slept on cardboard sheets on the back of the lorry.

Related Stories
More than 100 people offer to help couple who moved from lorry to rental flat
Man who lived on lorry with pregnant wife goes to update address at ICA -- but gets detained
More About:
heartwarming
couple
baby