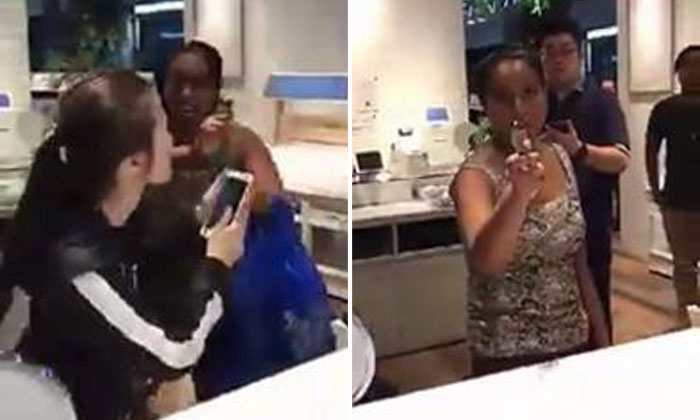 In response to a query, the police informed Stomp that a 45-year-old woman has been arrested after shouting at and hitting staff at an OWNDAYS store in Tiong Bahru Plaza on Apr 3.

Many Stompers alerted Stomp to a video of the incident that was posted on Facebook showing the woman flying into a rage and repeatedly shouting at and hitting two girls working at the eyewear store.

She continued to shout at and go at the girls even when a security guard had arrived at the scene.

She only sat down after more passers-by intervened.

"A 45-year-old woman was arrested in relation to the case.

OWNDAYS has since posted a statement regarding the incident on their Facebook page in response to members of the public expressing concern for the staff.

In the post, the eyewear company wrote that the two staff were assaulted while trying to help a female shopper who had come into the shop to hide from the lady when she turned aggressive.

They also lauded their girls for being brave and maintaining "their professionalism despite repeated assaults by the angry lady".

"We have since received many heartening messages from members of the public voicing concerns for our colleagues.

"We wish to thank you for your words of encouragement and kind concern.

"We would like to reassure you that the wellbeing and safety of every member of our team have always been a priority.

"Most importantly, we would like to commend our two very courageous colleagues who stood up for others in this unfortunate incident.

"Thank you and bravo girls!"

They are now seeking legal advice.

Netizens flooded the post with comments praising the girls for their bravery.

"[Your] staff [were] very patient and professional. Been hit and cursed but did not shout back. If I was there I would be shouting and cursing too. Hahahaha. Kudos guys!" wrote Norhafizah Nazri.

"Your staff was damn calm man. If it was me. I might have hit her back. I hope you gave them some time off to recover from the ordeal! Great to see so many passers-by stepping in to help when they saw the assault!!!" Marie Lim said.

Read the full statement from OWNDAYS and more comments in the gallery above.