Arrested: Guy assaults cabby outside Orchard Towers and even tries to drive off in taxi 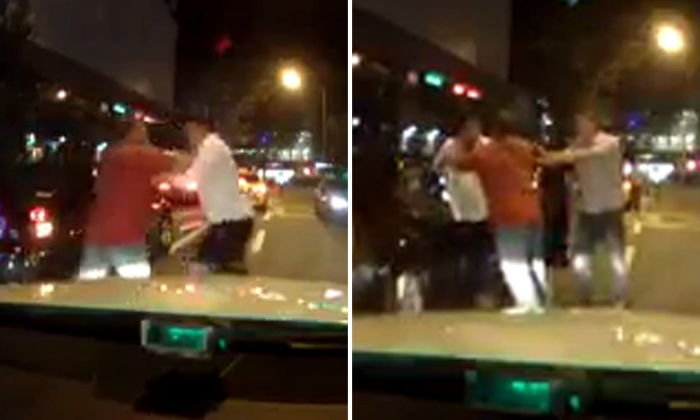 A 48-year-old man was arrested after being caught on camera attacking a taxi driver outside Orchard Towers on Feb 25, at around 1.15am.

Several Stompers, including Tina, alerted Stomp to a video of the incident which has been circulating on Facebook.

In the clip, the cabby, who was wearing a white long-sleeved shirt, can be seen conversing with a Caucasian man who was clad in a red T-shirt.

The latter then suddenly rushed over and starting shoving the taxi driver, refusing to back down despite the cabby's attempts to push him away.

At one point, the man even got into the black taxi and apparently tried to drive away in it, but was stopped by the cabby before he could close the vehicle's door.

However, a third man, also Caucasian and wearing a grey shirt, then intervened and grabbed the taxi driver by his shoulders.

The fight continued with the man in red grabbing the cabby's wrists and restraining his movements. He also kicked the driver and punched him in the face.

The scuffle dragged on further and was only broken up afterwards, with the help of a fourth party.

According to Shin Min Daily News, a 48-year-old man was arrested for being a public nuisance and investigations are ongoing.

It is unclear what triggered the fight.