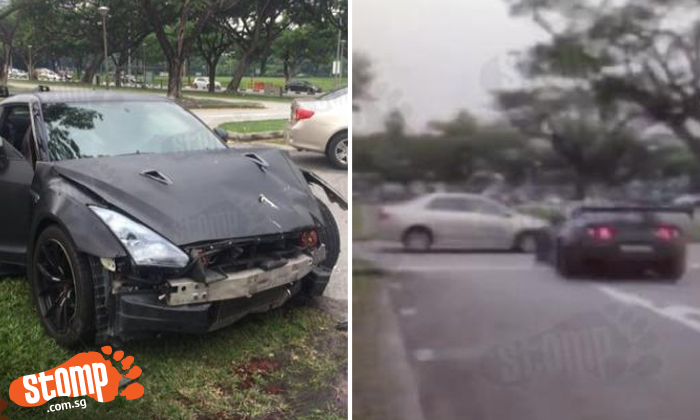 The teen driver who was caught speeding in a Nissan GT-R and crashing into a Toyota at a carpark on Stadium Road has been arrested.

Stomper Marcus shared a video of a Nissan GT-R racing through a carpark and crashing into the side of an oncoming car in Kallang.

According to The Straits Times, police said the 18-year-old suspected of dangerous driving and taking part in an unauthorised speed trial has been arrested.

The Nissan GTR involved in the collision has also been impounded by Traffic Police.

The driver had crashed into a Toyota car at the open-space carpark near Stadium Road on Saturday (Aug 27) at about 6.30pm.

"The Nissan GTR was believed to have been accelerating and travelling at a high speed prior to the accident," police said.

Both vehicles were seriously damaged and the 65-year-old driver of the Toyota reportedly sustained injuries to his ribs.

The 18-year-old suspect was arrested on Monday, and his driving licence was suspended.

For the offence of dangerous driving, convicted motorists are liable to a fine of up to $3,000, a jail term of up to 12 months, or both. A fine of up to $5,000 and/or jail for up to two years applies for repeat offenders.