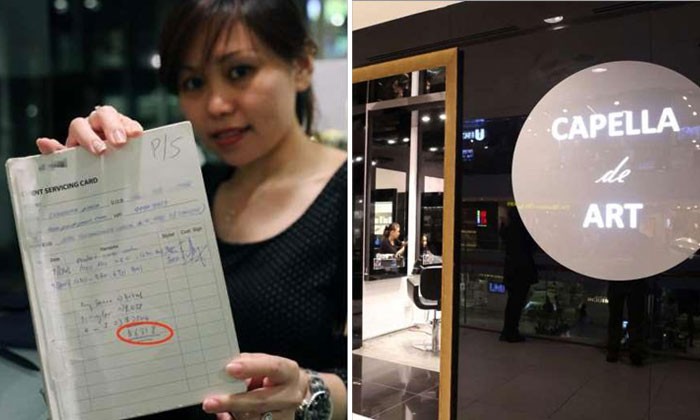 Another business that sold pre-paid services to customers has shut down, leaving many out of pocket, some with thousands of dollars left in unused treatments.

Plaza Singapura's centre manager said a few customers approached the mall after they went to the salon only to find a new business coming up in its place.

Ms June Ang said: "We tried to get in touch with the owner on their behalf, but to no avail."

She said the salon had operated from July last year until last month.

Ms Christina Phua, 32, a banking executive, had bought packages at Artist De Exchange worth more than $10,000 over a period of three years.

They included services like hair hydration and scalp treatment. She said she found out the shop was gone only when she went there herself on Dec 15, after her calls went unanswered.

What she saw was another hair salon taking over the unit and having renovations done.

"I did not manage to finish any of my packages, because three to four sessions into each package, they would sell me something else, saying it's better," she said.

Ms Lim Lay Hong, who is listed as the director of Artist De Exchange Group in Accounting and Corporate Regulatory Authority (Acra) records, could not be reached for a response.

She is also listed as the director of Rebornz Hair@Work, a salon in Boon Keng which closed in March.

The customer service executive was told she could go to Artist De Exchange at Plaza Singapura branch to use her prepaid services. She went to Plaza Singapura once in July, and was even given an appointment for Dec 17, when the branch had already closed.

"I'm upset, I wanted to do my hair for Chinese New Year. Now I'll have to go somewhere else, and spend more money, but it's a lesson learnt," she said.

Though it has no connection to the previous salon at Plaza Singapura, the one taking its place, Capella de Art, has offered its assistance to affected customers.

The general manager, who wanted to be known only as Yin, said she would absorb the remaining cost of a package or give 20 per cent to 50 per cent discounts to affected customers, on a case-by-case basis if they become Capella’s customers– out of goodwill.

She said many clients of the previous salon have come to her with outstanding amounts on their packages ranging from $100 to $20,000.

This is not the first time businesses have closed down abruptly after collecting prepayment. In November, a beauty salon in Jurong East closed down, leaving its customers with at least $20,000 worth of unused pre-paid services.

Case's executive director Seah Seng Choon said there were 27 complaints about Exchange Hair Plus this month alone. He said that prepayment protection for consumers is a cause for concern.

"Having seen an increase in the number of companies collecting prepayment and closing down abruptly in recent years, it is clear that there is a problem that needs to be addressed and we hope that the authorities will look into this matter," he said.

Meanwhile, consumers should minimise their risk by negotiating as low a deposit as possible if prepayment is required. They can also look out for businesses that offer prepayment protection.