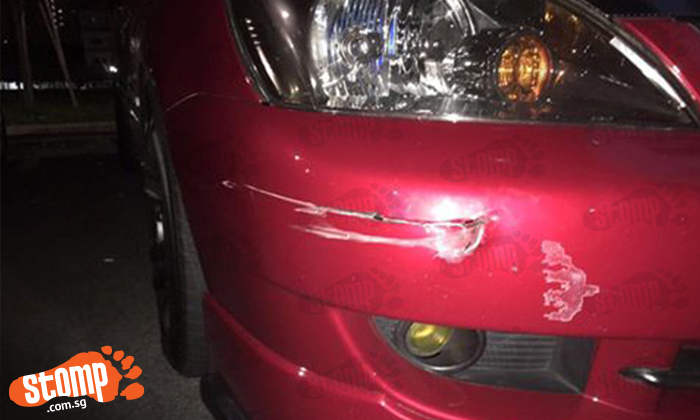 Stomper Wei Jian is appealing for eyewitnesses after his vehicle was involved in a hit-and-run accident at Woodlands Waterfront open-air carpark.

Wei Jian said he had parked his car there on Oct 16 at around 7pm. When he returned at 8.15pm, he "saw scratches and holes on the front right bumper of my vehicle".

His dashboard camera detected an impact and video footage shows a Shiok! Kitchen lorry hitting his right bumper as the driver turned out of the parking lot.

The video also shows two female passers-by looking at the car's bumper after the incident occurred.

In the post, Wei Jian said he contacted Shiok! Kitchen the next day. A Human Resource staff member assisted him and provided him with the vehicle number, GBC7896X. He was then advised to proceed with the insurance company.

A few hours later, one of the managers contacted him and denied that their company lorry was involved in the accident.

He said: "The manager appeared to be very rude, using foul language and even asking me to come out and "fight". So, I did a police report for this hit and run case."

Wei Jian ended off the post requesting for eyewitnesses: "I hope that any witnesses will see this post and contact me, especially to the two ladies that appeared in the video. Thank you so much."

Related Stories
Appeal for witnesses: Biker hits car at Malaysia causeway and simply speeds off
Have you see this van driver? Look what he did to my car while parking
40-year-old man arrested for hit-and-run accident at Newton Food Centre
More About:
car
accident
hit-and-run
carpark
woodlands
lorry