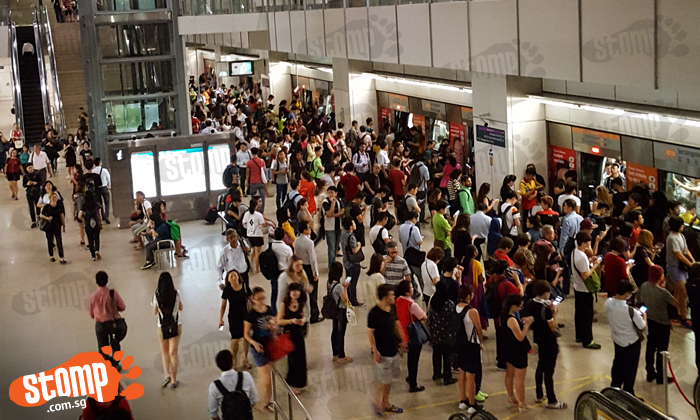 Commuters travelling on the Circle Line this morning (Nov 4) could not get any mobile service and also experienced a slight delay and a large crowd at the platform.

According to The Straits Times, Singtel, StarHub and M1 turned off mobile signals to enable investigations into a signal interference that had disrupted train service two days ago.

Thus, commuters will not be able to make calls, send SMS or access the Internet when travelling on the Circle Line.

All three telcos took to Facebook to tell users that the suspension of mobile services was originally meant to be for a limited period on Friday morning but was extended until further notice.

Stomper Chee Kiang, who is an M1 user, had alerted the Stomp Team to the suspension of mobile service.

Some commuters complained about the suspension of mobile service and considered avoiding travelling on the Circle Line.

Another commuter, Diya, was at the Circle Line platform when she witnessed a large crowd, and tweeted a picture of the crowd.

The Straits Times reported that sales executive Aaron Chong was travelling on the Circle Line from Tai Seng to Bishan at about 10.45am when the train stopped at Bartley station for about six minutes.

An announcement which came on said the train delay was due to an 'incident'.

The Land Transport Authority (LTA) posted an update on the "continued ongoing tests" and announced that mobile services on the Circle Line would be temporarily suspended on Friday.

Mobile services were also suspended on Thursday night, for more than an hour until about 10.30pm.

Train operator SMRT had earlier mentioned that it would arrange for the suspension of mobile signals to establish whether they had caused the signal interference on Wednesday that had delayed train service for three hours during the morning peak period.

The Strait Times also mentioned that two months ago, service on the Circle Line was disrupted by the same signal interference for a week, which disappeared before the source could be found.

SMRT said the Circle Line trains would be driven manually on Friday and that commuters should be prepared for delays.

Related Stories
Today's train delay: Passengers stuck on train for at least one hour with little ventilation
Commuters left frustrated after yet another train delay -- this time on North-East Line
Second time in a day: Train service disrupted on East West Line due to train fault
singapore
MRT
delay
crowd