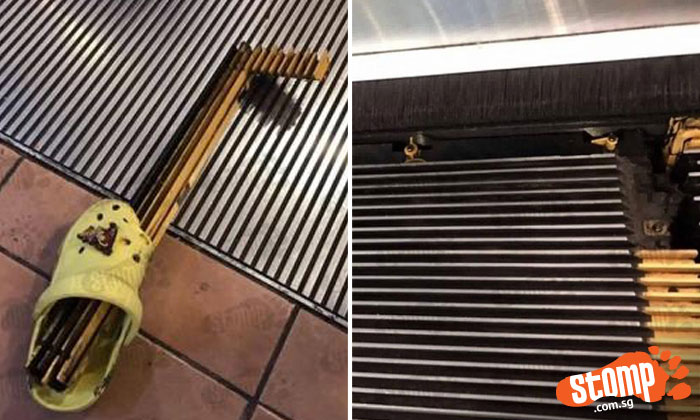 An AMK Hub spokesperson has responded to an incident where a metal piece from an escalator in the mall pierced through a 5-year-old's sandals.

Stomper M recounted the harrowing experience to Stomp in a phone interview and raised concerns about how she saw the escalator was in operation just hours after the incident.

The spokesperson issued Stomp with the following statement:

"AMK Hub confirms that an incident at one of our escalators on Basement 2 had happened on 15 December 2016.

"Immediately after the incident, the shopper was attended to by our security and customer service officers. There were no injuries sustained during the incident. We noted that the shopper’s shoes were damaged, our staff took the initiative to get a pair of footwear within the shortest time from a nearby shop so that the shopper will not be barefooted.

"The safety of our shoppers is of the utmost importance to us. While we regret this unfortunate incident, we hope that shoppers stay constantly mindful of their own safety and take the necessary precautions for themselves and members of their family. There are double-lined brushes to warn shoppers to stay away from the edges to prevent their footwear and clothing from being trapped in the escalator grooves and pre-cautionary guidelines affixed on the side panels.  With all these measures in place, we hope to remind shoppers to adhere to precautionary guidelines and exercise more care when taking the escalators especially with young children."