Ambulance found at Kim Keat Ave field where bendy bus got stuck: Tow truck trying to retrieve it gets stuck as well 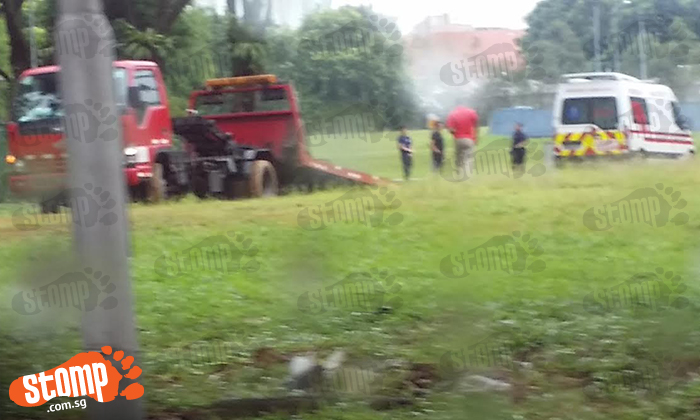 Stompers Jon and Michelle saw an ambulance in a field behind block 195 at Kim Keat Avenue at 12pm today (Nov 5).

The ambulance was found in the same field where a bendy bus was stuck for 10 hours.

Jon also said that a tow truck that was trying to pull the ambulance out of the field was stuck as well.

"Another tow truck was called in to pull the first tow truck out of the field," said Jon.

At about 12.28pm, all three vehicles were no longer at the field, added the Stomper.

Stomper Michelle said there was a group of teenagers playing ball games in the rain and one of them got injured.

When the ambulance arrived, the vehicle try to get near to the patient but got stuck in the muddy field, added Michelle.

The patient had to take another ambulance to the hospital, said the Stomper.

"The tow vehicle tried to pull the ambulance out of the place, and it took quite awhile," said Michelle.

"The ambulance was supposed to send the victim to hospital but instead they needed help," added the Stomper.

In September, the bus, which had tried to make a u-turn in the field after taking a wrong turn, had to be towed out of the soft earth.

An SCDF spokesperson said that the SCDF was alerted at ard 10.10hrs this morning, requesting ambulance assistance for a case of a person injuring himself in a street-soccer court adjacent to block 256 Kim Keat Avenue.

"A private ambulance operator with the SCDF was dispatched to attend to the case, which involved a male Chinese in his 20s, with a suspected dislocated left elbow," said the spokesperson.

While making its way out of the field, the ambulance got stuck.

Another ambulance was immediately dispatched.

"The patient was conscious and alert when conveyed to Tan Tock Seng Hospital," added the SCDF spokesperson.

Related Stories
How on earth did it end up there? SMRT bendy bus gets stuck on field at Kim Keat Avenue
What happened? TP officer rests on kerb beside fallen bike near Marymount MRT station
What happened? Tipper truck carrying branches and logs topples on its side at Jurong Town Hall Rd
ambulance stuck in Kim Keat field
bendy bus stuck at kim keat field
ambulance
unusual sight