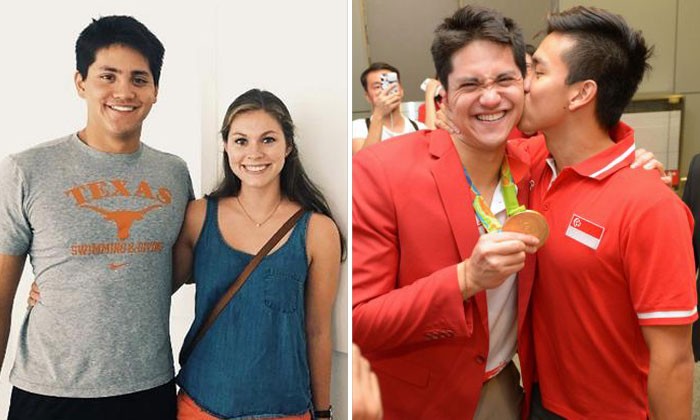 There are no greater supporters of Joseph Schooling than his two main pillars of strength - his parents Colin and May.

But we think one man also deserves special mention for always having Schooling's back throughout their 15-year friendship.

Fellow national swimmer Teo Zhen Ren is genuinely happy for and supportive of his best friend, whom he first met in 2001 when they both swam at the Singapore Island Country Club, and it shows.

Ask the 22-year-old about his long-time BFF and he is more likely than not to sing long praises of Schooling for the most part of an interview.

We suppose you can call it a "bromance".

He loves the guy, he said so himself.

How solid exactly is this friendship?

Distance? No problem. They always stay in touch via Snapchat and Face Time

In fact, just before Schooling, 21, went on to clinch the Olympic 100m butterfly gold medal on Aug 13, one of the people that he called was Teo to confide in him and tell him that he was "really nervous".

Teo, who was then in Singapore, currently lives in Los Angeles, a three-hour flight away from Schooling who lives in Texas.

The last time they met prior to Schooling's short return to Singapore was last August.

Teo told The New Paper: "Even though we don't see each other often, we keep in touch through Snapchat and FaceTime.

"Our bond is still strong despite the distance," he said.

Despite Schooling's hectic schedule here, they made sure to hang out - a lot

In fact, on the night of Schooling's arrival in Singapore on Monday, the pair managed to steal some time to catch action flick Jason Bourne starring Matt Damon.

Teo could not resist poking fun at Schooling, whom he said seized the opportunity to catch forty winks in the theatre.

Teo said good-naturedly: "I think he was tired so he might have fallen asleep during the movie, possibly a few times."

Apart from movies, the pair enjoy regular guy activities together like golf as well as video and computer games.

While fans swarmed Schooling during the victory parade (Aug 18), Teo played the part of the loyal wingman

We spotted Teo granting a disappointed mother-daughter pair a special favour when they asked for his help to try to get a selfie with Schooling.

They had been first in line at Raffles City Shopping Centre but had walked away without a photo during the autograph session with him.

Ever the gentleman, Teo spoke to officials and even led them onstage, even helping young Thessabel Chang, 12, snap a quick photo.

And for that, Thessabel and her mum were eternally grateful, calling him a "kind, kind man".

Those who had no chance to snag a prized selfie with the swimming star went after Teo instead for photos.

And he always obliged, often with a friendly smile that stretched from ear to ear.

In fact, it was reported that about 20 fans ambushed him as he was going to the toilet.

Never mind that he woke up at the ungodly time of 3.30am, or that Schooling's flight was scheduled to land at 5.30am.

Teo had to make sure he was present at Changi Airport to welcome Schooling back home.

And when they met, the friends bro-hugged with an over-enthusiastic Teo even planting a cheeky kiss on Schooling's cheek.

The gracious athlete also hosted Mr Schooling last Saturday (Aug 13) at his family home, where they watched Schooling during his historic win.

Teo was so proud of and happy for Schooling that when interviewed about his reaction after, he stuttered and could barely string a complete sentence.

He told TNP later: "I just couldn't believe my eyes, it was an incredible feeling. I teared after the race... but I don't want Joseph to know that!

"I was just so blessed and happy to know him and be part of hs swimming journey. To actually see him achieve the biggest achievement any athlete could ever achieve... that is something"

Teo said that they have always shared their ups and downs.

"He's a joker, for sure, and we always make fun of each other. But at the end of the day, we always support each other, especially when we face tough times," he said.

In short, he's thankful to have Schooling as his best mate