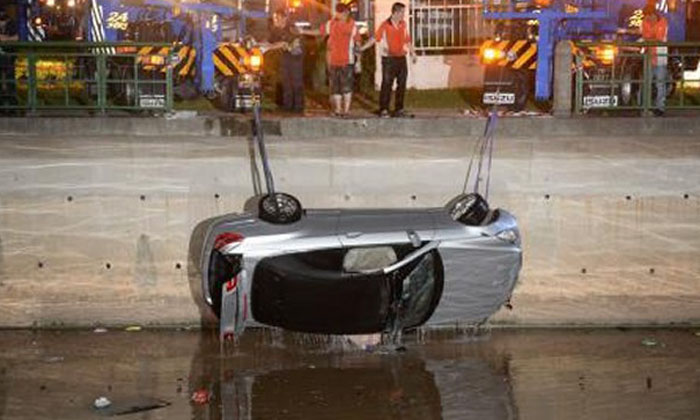 Earlier this year, two bodies were pulled out of Alexandra Canal after a Mercedes-Benz plunged into it.

Stomper David was at the scene that day in Jan and had shared photos of the rescuers trying to fish the bodies out.

The two passengers in the car were a mother and daughter pair, Madam Yep Lay Choo, 51, and Kimberly Poon, 22, who were pronounced dead when their bodies were retrieved from the water.

Madam Yep was at the steering wheel when the accident occurred, while her daughter was in the front passenger seat.

According to AsiaOne, An inquiry into their deaths began on Monday (July 4) and here are the key findings that were brought up in the Coroner's Court by Investigating Officer (IO) Jegadeeswaran, as reported by local media.

- Upon exiting the carpark of Valley Point Shopping Centre, the Poons' car did not seem to have braked as it went over the final hump leading out of the mall's basement carpark.

- From the exit of the carpark until it hit the water, CCTV footage showed the car covered 14.6 metres in three seconds.

- The car shot out instead of turning right onto the road, hitting a kerb before it swerved left and collided with the canal's railing.

- Based on footage, Mdm Yep did not apply the brakes until the car had crashed into the railing.

- The impact dislodged the railing and sent the car plunging into the 3 metre-deep canal.

- Mechanical inspection of the vehicle showed that damages had been caused by the impact during the accident.

- No other mechanical defect was found on the vehicle that could have led to the incident.

They both suffered rib fractures from the impact of the crash.

IO Jegadeeswaran said that the police do not suspect foul play and that the accident was likely caused by human error.

"It was possible that Madam Yep was distracted upon leaving the carpark, thus causing the vehicle to shoot straight ahead instead of realising that a turn was required," IO Jegadeeswaran was reported as saying in The Straits Times.