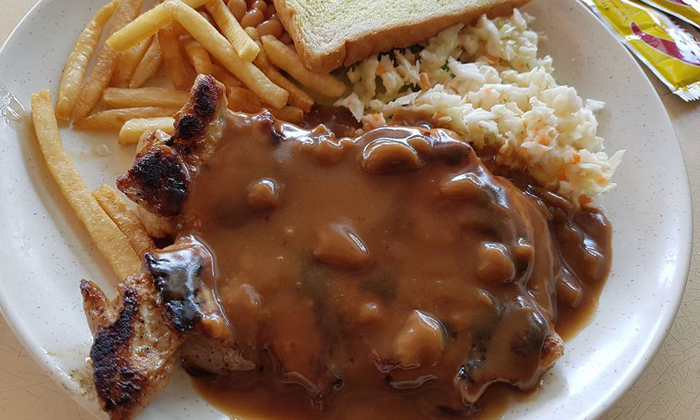 An 'Ah Beng' wrote in his food review that just looking at the chicken chop that he ordered made him drool even before he dug in.

Well, the same effect is applied to anyone who reads his funny writeup about the stall, 5 Star Corner Western Food located at Block 805 Hougang Central.

The writer starts off his review by saying. "Today one bro tell me got one western stall open by some ah bengs at hougang. Walao i tot hougang i the only ah beng haha. He told me the chicken chop is to die for. Ok lor try lor, if not nice lim pei chop u ar haha. Jokin la i civilised one."

He then went on to describe the chicken chop set that he ordered for $6 in vivid detail, such as, "U see the thickness of the chicken swimming in the generous sea of gravy, even vegetarian also will tempted."

Calling the gravy "a heaven match with the chicken like romeo and juliet", the Ah Beng further shows off his flair for writing and adds, "Not too showy and too heavy to dominate chicken meat taste but just there to support and compliment it. It's just like [a] relationship, mutual respect and support, no one party dominance."

Although 'Ah Beng Foodie' is a page dedicated to a variety of food reviews, this particular post about chicken chop on Feb 8 has gone viral, with nearly 1,000 likes and more than 1,700 shares.

Read his full post in the gallery and try not to salivate.