Accident where man got pinned under bus: 'Umbrella man' disappointed crowd took photos instead of helping 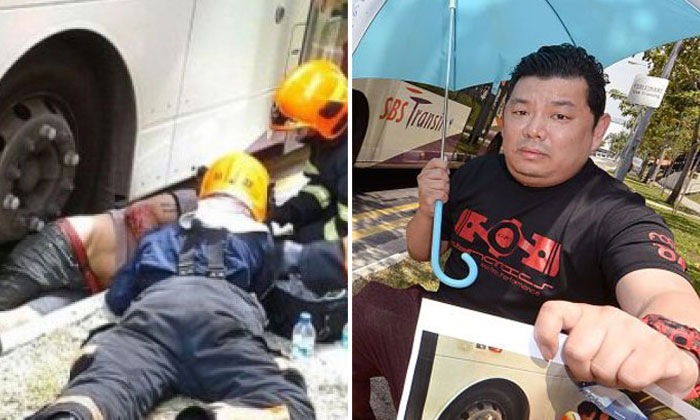 Mr Albert Leow was at home when he heard a loud crash.

When he looked out the window, he was horrified to see a man pinned under an SBS Transit double-decker bus.

Mr Leow called the police and rushed down to help the victim.

Recalling a video showing a group of people lifting a lorry to free a trapped victim in an accident in July last year, Mr Leow, 41, thought the 20 to 30 people who had gathered there could do the same.

But he was dismayed when several of them were more interested in taking pictures and videos of the trapped man instead of helping him.

His HDB flat at Block 662, Hougang Avenue 9, overlooks the scene of the accident, which occurred opposite Ci Yuan Community Club at 10.30am on Sept 30.

Mr Leow, who runs a car workshop, told The New Paper on Tuesday (Oct 4): "At first, I thought his head was pinned beneath the wheel."

When he got there, he realised it was the victim's right leg.

Said Mr Leow: "I felt so sad and helpless. The only thing on my mind was to keep him conscious. He kept saying his leg was in pain."

Mr Leow said he had tried to get the crowd of bus passengers and pedestrians to try to help Mr Lim.

"I called out to them to come forward to help lift the bus," he said.

But no one responded.

Said Mr Leow: "I'm very sad because there were so many people there, but no one came forward to help. I can't lift the bus off the victim on my own.

Referring to those who were preoccupied taking pictures and videos of the scene, he said: "What's the point of taking all these photos? What good will it do them?"

A bus passenger, Mr Bernard Chua, 45, said: "No one came to help, they were just taking photos."

Mr Leow noticed that Mr Lim's head was on the kerb, which was hot.

"So I borrowed a lady's umbrella to shield him from the scorching sun," he said.

For his kind deed, he was dubbed "The Umbrella Man" by netizens.

"Another kind woman gave me her handkerchief, which I placed between the hot kerb and his face," he added.

Mr Leow said: "The SCDF and SBS officers were all professional and calm. They were polite to me and let me stay to hold the umbrella over him."

When Mr Leow walked into the room, Mr Lim recognised him and kept thanking him.

Mr Lim, who is single and lives alone, told TNP that all he could remember about the accident was that he was heading to a coffee shop to look for a job.

"I'm not angry at the bus driver, I forgive him. He was just doing his job," he said.

Last Wednesday, The Ray of Hope Initiative, a non-profit organisation, contacted TNP to offer financial help to Mr Lim. Mr Lim said he will be undergoing his second operation today at the hospital.

Mr Leow said: "I hope more people will render their help if they see an emergency. Don't wait for the SCDF because it might be too late."

I'm very sad because there were so many people there, but no one came forward to help. I can't lift the bus off the victim if it's just me alone.

Mr Albert Leow said, "What's the point of taking all these photos? What good will it do them?"

TO TAKE PHOTOS OR HELP?

The people who took pictures and videos of the accident, instead of helping the victim, might not have done so out of malice, said a psychiatrist.

Dr Brian Yeo, a psychiatrist consultant at Mount Elizabeth Hospital, told TNP he thinks taking videos and photos of an accident instead of directly helping is a habitual response rather than a conscious decision.

Dr Yeo said: "It's something unusual, like what you see when there's an MRT breakdown and people start taking videos.

"I don't think they think about it. It's more of a habitual reaction. I don't believe that there is any malice involved."

Mr Lars Voedisch, an international communications strategist and social media expert, told TNP: "As a rule of thumb: only film, post or share other people's misery if you'd be okay of others filming you in the same situation."

Mr Voedisch said that people usually record these incidents out of natural curiosity, to share the incident with close friends or family.

But he also said that others record these shocking images to get attention on social media.

Social media consultant and director of thinkBIG Communications, Belinda Ang, told TNP it is the intention that matters.

She said: "If the intent was to document evidence or information for the arriving officers or to provide a story for public interest, it will be deemed more acceptable than the concern over being the first one to break a news on social media."

Mr Cesar Balota, associate general secretary of the Singapore Kindness Movement (SKM),said the incident was one of those undesirable instinctive reactions that happen today.

He said: "What we'd rather highlight are Mr Bernard Chua who called the police, as well as Mr Albert Leow and a few others who stayed to comfort the victim.

Joseph Lee said, "SKM's encouragement is for us to act on the thought that kindness is up to us, and those who chose to help and get involved are an inspiration to the rest of us."

Related Stories
Elderly pedestrian's leg so badly mangled in bus accident it had to be amputated
Drivers and cabbies stop to help in accident along PIE
Watch how bus smashes into lorry while changing lanes on the PIE
More About:
accident
Bus
driver
reckless driver
man disappointed people take photos