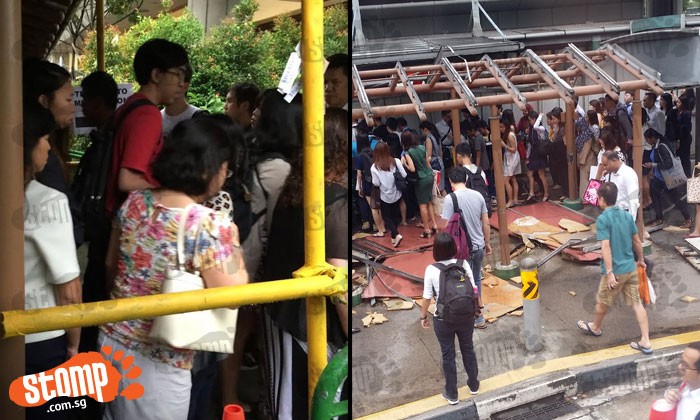 Submitted by Stomper Foong and Zafrullah

Stompers Foong and Zafrullah spotted a human traffic jam this morning (Oct 3) at a makeshift walkway at Lakeside Mrt Station.

Stomper Foong was one of the commuters using the walkway at 6.30am, and recalled it took her more than 10 minutes to get to the other side.

“I had to squeeze my way through,and took it more than 10 minutes. I had to walk under the railing then walk on the uneven grounds of grass.

“There was a merging of two-way traffic, people were shouting and pushing, able bodied people even jumped over the railings.”

Stomper Zafrullah was on board one of the buses that was stuck in the jam brought about by the human traffic, and arrived at the site at around 7.40am.

“There was no proper and safe alternative for commuters to get to the station.

“Some commuters were seen trying to squeeze through a gap at the work site to get to the station.

“Commuters even resorted to walking on the road, causing a minor traffic jam this morning -- stretched back to after the Canadian International School.

According to both stompers, the station’s drop-off point and walkway were being upgraded over the weekend, and were annoyed with the great inconvenience it brought to the weekday peak-hour commuters.

“I’m really angry with how the contractor did not take into account the many who people will be using the walkway, especially during the peak hours.

“There are many people using the walkway: school children, passengers from buses along the way, workers to the factories as well.

“This morning there were even wheelchair bound people, and they were all so helpless during what happened,” said Foong.

Both commuters feel that this situation has put the commuters of the area in major risk of accidents.

“The authorities need to do urgent intervention before fights over rights of way take place,” said Foong.

“It worries me as commuters are put at unnecessary risk especially those walking on the road and those entering the work site to get to the station,” said Zafrullah.