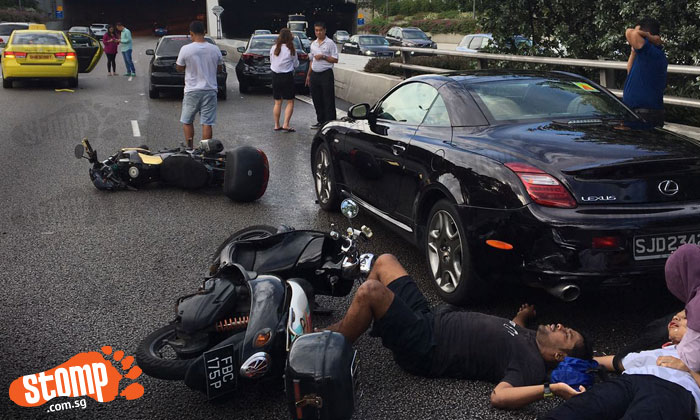 An accident involving two motorcycles and a car outside CTE tunnel caused a massive jam during the morning peak hour today (Nov 2) at 8.05am.

According to a spokesperson from the Singapore Civil Defence Force, the accident took place on the CTE highway towards AYE, near Cairnhill exit.

The SCDF was alerted to the road traffic accident at 8.05am and dispatched three ambulances to the scene.

Three people were conveyed to Tan Tock Seng Hospital, where the hospital was alerted to be on standby and received two of them.

Of the two, one was a male Indian in his 30s, and the other an Indian female in her 30s.

According to the SCDF, the last person had sustained minor injuries.

Police investigations are still on going.

Two Stompers who wrote in were stuck in the massive jam this morning.

Said one of the Stompers:

"I was late for work by an hour thanks to the jam.

"I boarded the cab from Jurong at 9am, and reached my workplace at Braddell at 10.30am.

"Thankfully I took a Grabcar, I can't imagine how much I would have had to pay if I took a normal cab.

"There were even other mini collisions that took place, contributing to the heavy traffic."