A surprise proposal, non-stop partying with celebs and endless luxury at It's The Ship 2016 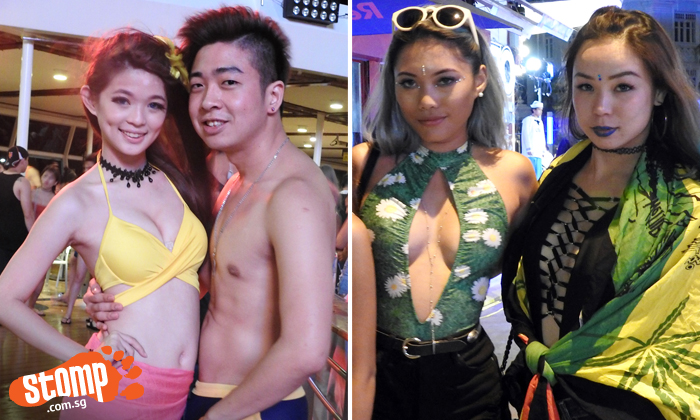 Asia’s largest festival-cruise, It’s the Ship 2016 was one of most anticipated parties of the year – and it definitely did not disappoint its 3,800-strong crowd.

Helmed by American actor and ’Baywatch’ star David Hasselhoff who played ‘Captain’ of the ship, partygoers embarked on a four-day nautical adventure from Singapore to Penang, then back again.

Guests lived it up on board Royal Caribbean’s Mariner of the Seas in lavish cabins. Each is fully furnished with a Royal King bed, spacious sitting area with a plush sofa, private bathroom, minibar, vanity table, television and more.

Suites also come with your very own balcony, which offers a splendid view of the turquoise skies and aquamarine ocean.

The magnificent ship is also equipped with cool facilities such as a Broadway-style theatre, a basketball court, a rock-climbing wall, a mini-golf course, a fitness centre and a Vitality Spa to help one rejuvenate.

Need to replenish all that energy burned while partying? Not to worry, there are plenty of 24-hour dining options, such as the Windjammer Café which serves a buffet spread bigger than you can imagine.

Shipmates were also kept entertained with a diversity of side activities such as a hip-hop block party, a barbecue on the deck and even an ice-skating performance in a state-of-the-art rink.

Elegance reached new heights on the ship’s Main Dining Room, reminiscent of the Titanic set where Jack gazes at Rose making her graceful descent down a grand staircase.

To mark the cruise’s final night, guests got to savour a sumptuous gala dinner at the three-storey and music-themed restaurant.

Yet, it was not David Hasselhoff serenading the crowd with his powerful vocals or a Sexy Sax Man busting out some scintillating moves that proved to be the most memorable part of the evening.

Rather, it was a surprise proposal witnessed by thousands that stole the limelight. And of course she said yes.

Another activity that took centre-stage was a pop-up carnival in Penang, which is famed for being a melting pot of art, culture and history. An entire street, lined with bars and clubs, was closed just for the occasion.

Festival-goers were welcomed with colourful flowers garlands at Swettenham Pier, before indulging in four hours of drinks, music and live performances. Pop-up food stalls also gave them the opportunity to taste some of the Malaysian state’s best local cuisine.

But It’s The Ship 2016’s biggest highlight was definitely its star-studded lineup of 83 acts from around the world, from international headliners such as Far East Movement to Singapore’s very own Shigga Shay.

Thrill-seekers rocked out to their sick beats from day to night on various parts of the ship, including its main stage on Deck 11, which offers unparallelled views of Marina Bay Sands and the surrounding sea.

And when you get to party with some of the most talented musicians out at sea, who needs sleep?

Related Stories
Thank you Giant Adventure Team and Star Cruises for keeping cyclists in Japan safe from the typhoon!
travel
party
club
It's The Ship 2016
It's The Ship
Mariner of the Seas
Royal Caribbean