A 'spaceship', live-streaming screens and more futuristic features: Here's a first look at the new Zouk in Clarke Quay 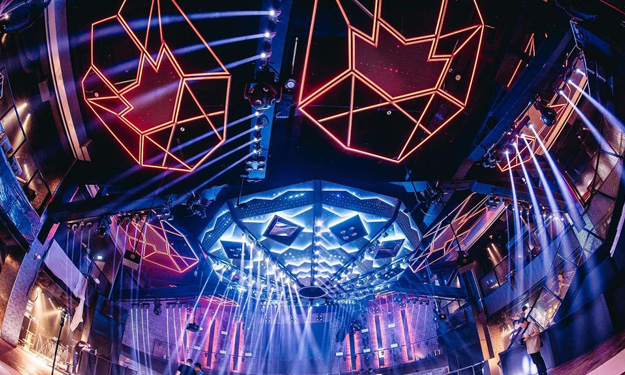 A spaceship has docked at the new Zouk at Clarke Quay.

Hovering over the main dance floor, it shoots out beams of light in various formations and "floats" up and down over revellers.

This UFO-like feature, affectionately titled the "mothership" by its designers, is one of the many high- tech and futuristic features at the new superclub.

In many ways, the opening of the new Zouk tomorrow is a special alien landing in itself.

Punters will likely approach it with equal parts curiosity and caution. They are probably wondering how the club will look under its new owner, casino and cruise-line conglomerate Genting Hong Kong (GHK), which bought Zouk from its founder Lincoln Cheng for an undisclosed sum late last year.

Club regulars are a sentimental, loyal bunch. They gave an emotional farewell to the old nightspot two weeks ago, queueing for hours before Zouk opened for its last party on Dec 3. At 7.40am the next day, as the house lights came on, they cried as the last song, The Beatles' Let It Be, played.

Is the old Zouk gone forever? Is the new club a worthy successor? The Straits Times pays a visit.

The new Zouk is housed in The Cannery, a space once occupied by Ministry of Sound and Zirca. At 898 sq m, the area is about the same size as the old premises.

But the interiors are completely different. The old club had an iconic biomorphic design, with organic forms and curves in its walls. The new Zouk is sharper and neo-industrial in vibe, with details such as exposed brick walls and metal grilles.

The first floor is dedicated to the two dance zones that were mainstays in the old club: the main Zouk dance floor, which plays dance music by resident and international DJs and holds 1,900 partygoers; and Phuture, which plays hip-hop music and holds 700.

The difference is that the two zones can be combined into a gigantic dance floor. The wall separating them is a series of soundproof panels that can be removed for special occasions, such as Zouk's official opening night on Jan 13, for which American superstar DJ-producer Diplo will be flown in.

Also, in the past, with the lack of live-feed television screens, partygoers had to crane their necks to see the action on stage.

In the new club, huge live-streaming screens will be mounted behind the five bar counters so that no one misses the action.

Meanwhile, house music fans may lament the fact that Velvet Underground and Velvet Lounge are not returning, but a yet-to-be- named third club concept that occupies part of the second floor may provide some consolation.

For old-timers, there are nods to history. The curvy DJ console in the main room mimics the fluid forms of Zouk in Jiak Kim, and the toilets on the second floor have communal wash basins - just like at the old club. The new Zouk will also sound like the old one. The sound system, designed by renowned audio engineer Gary Stewart and used in Jiak Kim for its 25-year tenure, has been retained.

GHK's chief information officer Hui Lim, 32, was the brains behind the revamp, which cost an "eight- figure sum". The Malaysian is the eldest son of Mr Lim Kok Thay, chairman and chief executive of Genting Berhad, the holding company of the Genting Group.

The younger Mr Lim says he wants to respect the club built by Mr Cheng while scaling it up internationally into a bigger nightlife and entertainment brand.

He notes that when Zouk opened in 1991, it was a cutting-edge product for a niche audience. "I respect Lincoln Cheng for his forward- thinking vision, but now, dance clubs have become more holistic in terms of being a part of the bigger entertainment industry."

Hence, Zouk is moving rapidly from a standalone nightclub in a quiet street into a global lifestyle brand, starting with Zouk At Sea, a club housed in Genting Dream, GHK's newest cruise ship.

It is also venturing into food and beverage with the September launch of Asian-themed restaurant and bar Red Tail, a pre-party spot located about 200m from Zouk.

And the cogs are in motion to take the ZoukOut dance festivals to the rest of Asia, with a series of pre- ZoukOut shows in Boracay, Tokyo and Hong Kong.

Mr Lim says the real testament to the brand's success is "when we get off these shores".

He does not write off future expansion to Europe and the United States. And he rubbishes talk that rapid growth might dilute the Zouk brand.

"Why do we have to keep it a hidden gem in Singapore? Zouk has been a huge success here, why don't we share it with the world?"

And to sceptics who feel Zouk might lose its soul after moving to its new digs, he says they have to experience it for themselves before making judgment.

"We're trying to elevate the product and, hopefully with that, widen the target demographic for the club. We believe that Zouk at Clarke Quay is a flagship product and Singapore is always home for Zouk."