8-year-old comes from a family of ex-cons: "I don't have many friends" 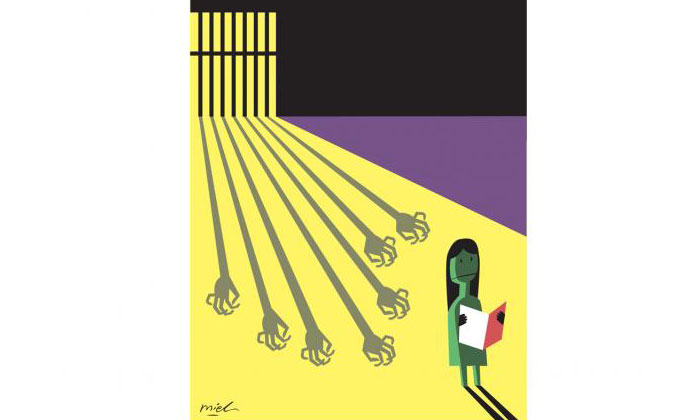 Aisyah, now eight, has never met her father. Her mother was in prison for half her lifetime - four years. Her parents never married.

Her grandparents and an aunt are also ex-convicts; like her mother, they were sentenced for drug offences.

When her mother was jailed - for the second time - for drug offences, Aisyah's great-grandparents had to take care of her and her stepsister, now five.

The stepsister is her mother's child by another man.

Aisyah (not her real name) has another sibling, a baby stepbrother - her mother married his father after she was released from jail last year.

Her mother, now 30, works as a sales assistant.

Aisyah is bubbly, but she does not make friends easily.

She says: "I never told anyone my mum was in jail. I was afraid, if they knew, they would not want to be my friend. I don't have many friends."

She is one of thousands of children here suffering from emotional hurt and material deprivation because of the mother's criminal behaviour and imprisonment.

There were 1,240 women in jail here at the end of last year, although the Singapore Prison Service did not say how many had children.

This group of female prisoners and their children warrant greater attention and help.

For a start, there might not be anyone to look after the children when a woman is sent to jail.

When men go to jail, there is often a wife to care for the offspring, say social workers.

In 2012, the Singapore After-Care Association started an initiative to ensure that children of newly incarcerated women would be cared for and given the help that they need to cope.

In some three-quarters of such cases, grandparents have to step in as caregivers when the mother is jailed.

The fathers are often not in the picture - they could be in jail themselves, or the parents could be divorced.

Such children need more attention. The risk they face is termed intergenerational offending.

This happens when children - like their parents or grandparents before them - break the law and end up in jail as well.

A host of research overseas has found that children are adversely affected by their parents' incarceration and are more likely to follow suit as a result.

This prompted Mr Amrin Amin, Parliamentary Secretary of the Home Affairs Ministry, to announce in May that the authorities want to focus more on helping inmates' children and to reduce intergenerational offending.

For example, the Yellow Ribbon Community Project has grassroots volunteers visiting families of newly incarcerated inmates to see what help they need and to link them up with aid agencies.

Since July, its volunteers have also been trained to identify children who might need more help in areas such as counselling or their studies, linking agencies up to support them.

Dr Sytske Besemer of the University of California, Berkeley, says the odds of offending for children with criminal parents are on average 2.5 times higher than for those with parents who are not offenders.

Her soon-to-be-published research is based on a meta-analysis of 24 studies on the topic, she told The Sunday Times.

Children of offenders are at higher risk of offending not because they are "bad" children.

Children learn the values and behaviour of their parents.

Their home environments are often troubled - money is short and their parents are not positive guides.

These factors raise the chances of the children ending up in trouble, Dr Besemer said, citing past research.

Ms Durga Naidu, a senior social services executive at the Industrial and Services Cooperative Society (Iscos), which helps ex-offenders and their families, noted: "Without proper guidance in their lives, children might stray from their studies and look for company in the wrong places. Their friends can be a bad influence, leading them to illegitimate ways to make money."

The odds of offending are even higher for children with a mother in jail.

An American study of more than 7,000 prisoners, both men and women, found that incarcerated women are 2.5 times more likely to have an adult child in jail, compared with incarcerated men.

And those "at especially high risk" of imprisonment are children of female drug users, a study by Dr Danielle Dallaire at the College of William and Mary found.

This is because the quality of caregiving and separation from the primary caregiver, usually the mother, have a profound impact on a child during the formative years of the child's life.

And the quality of parenting by a drug-addled mother is, needless to say, cause for concern.

One former heroin addict told me that at the height of her addiction, all she could think of was herself and how to get her next fix.

She often lied to her mother that she needed money to buy milk and diapers for her two young children, only to use it to buy drugs.

So the million-dollar question is: How can we stop Aisyah - with her disadvantaged background and a family laden with drug issues - from ending up in trouble too?

The issue is even more pressing as the drug problem is creeping up again among men and women here.

And the odds of re-offending are higher for drug offenders than for those who committed other crimes.

Of those released in 2013, almost one in three (31.9 per cent) re-offended within two years of release from DRC.

The recidivism rate for penal offences is one in four (24.7 per cent.

So what can be done?

Currently, initiatives focus largely on helping inmates' families through financial and other forms of aid, for instance, by giving tuition to the children.

But there is also a need to reach out to support and guide children of inmates before they go astray.

For example, Iscos is already taking steps in this direction through its Fairy Godparent programme, which is aimed at breaking the cycle of intergenerational offending.

As part of the programme, Iscos pairs children of ex-offenders with mentors.

These mentors provide guidance, emotional and other forms of support to children who lack parental guidance.

More of such efforts would be helpful.

More support has to be given to the prisoners as well.

For women, especially drug offenders, it is vital to help them get their lives together after they are released.

This process could take years.

And when their lives are more stable, groups can look at teaching them parenting skills.

While efforts to break the intergenerational cycle of offending are resource-intensive, they would go a long way towards helping children like Aisyah.

She could hardly speak English, let alone read, when she started primary school. Volunteers from New Life Stories, a charity that helps incarcerated mothers and their children, have been reading to Aisyah regularly for the past 21/2 years.

When I met her last month, she proudly showed off her new-found reading skills to me.

She told me: "I want to be very clever. Some classmates kept calling me stupid, and it made me sad.

"My English has improved a lot, and I'm very happy. I want to be a teacher (when I grow up)."