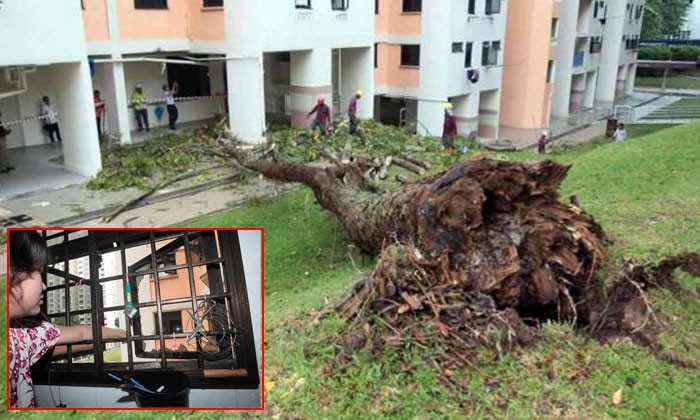 A tree about eight storeys tall was believed to have been felled by heavy rain and strong winds early Monday (Oct 3) morning at Holland Close.

The fallen tree damaged gas pipes and affected the gas supply to an estimated 72 households living in a block of flats.

A Singapore Civil Defence Force (SCDF) spokesman said it was alerted to the incident at Block 1, Holland Close, at 5.41am.

A fire engine, a red rhino and an ambulance were dispatched to the scene, although no injuries were reported.

For safety reasons, SCDF also shut off the mains to the gas pipes.

The tree's falling branches shattered the windows of five units in the block.

A resident who lived on the fourth floor told the Chinese evening daily that his unit's gas supply was cut off from about 6.30am.

"It was really inconvenient without a gas supply. My wife often makes breakfast, but this morning we had no choice but to go out and buy food," he said.

A Singapore Power spokesman said the tree had damaged a gas riser and an estimated 72 units in the block were affected.

"Our technicians were immediately deployed to the site and our priority was to ensure the safety of everyone in the vicinity. As a precautionary measure, valves to the gas pipes were shut off by the Singapore Civil Defence Force (SCDF) to isolate the leak," he said.

The spokesman added that the gas supply was restored at 8.45am, although it was interrupted for about 15 minutes at around 1pm to allow repair works to be completed.

In response to media queries, a Tanjong Pagar Town Council spokesman said it was working with the Housing and Development Board to contact the owners of the five units whose window's glass panes had been damaged.

Shin Min also reported that at least 19 trees had been felled over the past two months due to thunderstorms.

The Purple Millettia, which was over 60 years old, damaged several apartments.