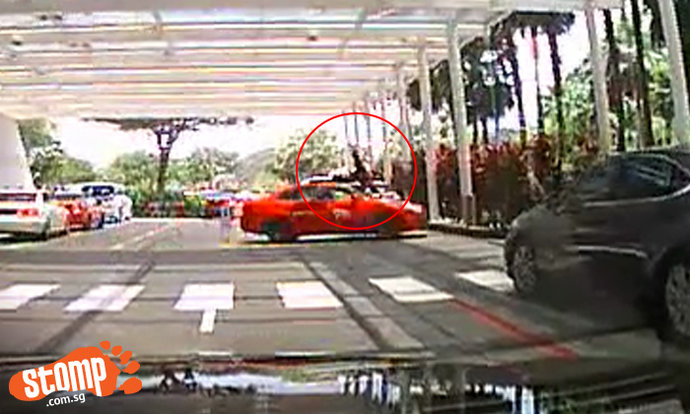 The man who was hit by a taxi at Marina Bay Sands (MBS) was a valet captain who was working at the time of incident on Saturday (Sep 24) afternoon.

Stompers Dean, Bill, Mike and Marcus sent in a clip of the shocking incident, where the 70-year-old valet is seen walking on the hotel driveway at Bayfront Avenue's Tower 1 when he notices a red Trans-Cab taxi approaching.

According to The Straits Times, he slows down, but despite his attempts to backpedal, the vehicle hits him and sends him flying.

The taxi then crashes into a pillar. Throughout the incident, the sound of screeching tyres can be heard.

A second video contributed by Dean shows a crowd and security personnel rushing to check on the accident scene.

An MBS spokesman said that the elderly man was performing his duty at the time of the accident.

"He is currently being treated in hospital. We are rendering assistance to him and his family during this time, and are currently helping the authorities in their investigations," the spokesman added.

In response to media queries by Stomp, a spokesperson for the Police said that they were alerted to the accident involved a taxi, a car and a pedestrian at 1.30pm.

He added: "The 52-year-old taxi driver and 70-year-old pedestrian were conveyed conscious to SGH. Police investigations are ongoing."

The SCDF dispatched two ambulances to the scene and said that SGH had been alerted to be on standby to receive the victims, one of whom is a male Chinese in his 70s.

When contacted, Trans-Cab said it was investigating the incident.