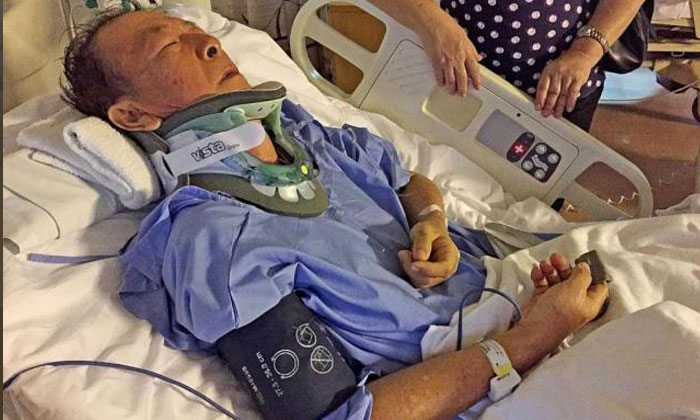 The Land Transport Authority is probing a case in which a 69-year-old bus passenger fell flat on his back in a Tower Transit bus when it braked suddenly.

Mr Loy Chee Bin suffered a spinal nerve injury near his neck in the Aug 29 incident and remains in hospital.

"He is unable to move his lower limbs and right arm and is undergoing rehabilitative therapy at the community hospital in Ang Mo Kio," said his son, Mr Joseph Loy, 39, yesterday.

The LTA's probe could, among other things, establish if a car swerving into the path of the bus caused it to brake suddenly.

It is believed to be the first serious incident on a Tower Transit bus since the company began operating on May 29, taking over several routes from SBS Transit.

Its debut as Singapore's third bus operator marked a key step in the restructuring of the bus industry to raise service standards.

Mr Loy had boarded the Tower Transit service 143 along New Bridge Road in Chinatown and was walking towards the rear of the vehicle when it came to a sudden stop and he lost his balance, said his son.

Mr Loy, a cabby for 30 years, was heading home after having taken a test to renew his vocational licence. He was taken to the Singapore General Hospital, where he underwent surgery.

He was there for two weeks before being transferred for a fortnight to St Luke's Hospital and then to the Ang Mo Kio-Thye Hua Kuan community hospital.

His son said the bill for the first two hospital stays has come up to $18,000 and was mostly paid through his father's MediShield Life and Medisave account. It would have exceeded $48,000 if not for the government subsidy, he said.

"After the operation , he lost the power of his arms and legs. The doctors have done all they can and it would take a miracle for him to fully regain use of his limbs.

"My father is a restless and active man who jogged frequently and this accident has affected him emotionally," said Mr Loy.

He said the bus company had sent a basket of fruits and a goodwill note while two company staff members visited his father last week.

Tower Transit Singapore said in a statement yesterday: "For anyone who steps on board a Tower Transit bus, or into one of our bus interchanges, we go to great lengths to make sure they come away feeling safe and warmly served.

"Mr Loy was one of our passengers and we're committed to assisting him, his son Joseph and the rest of his family in every possible way during this difficult time."

Mr Loy's lawyer, Mr Steven Lam, said he will be contacting the insurance underwriters and the company for further details on the case.