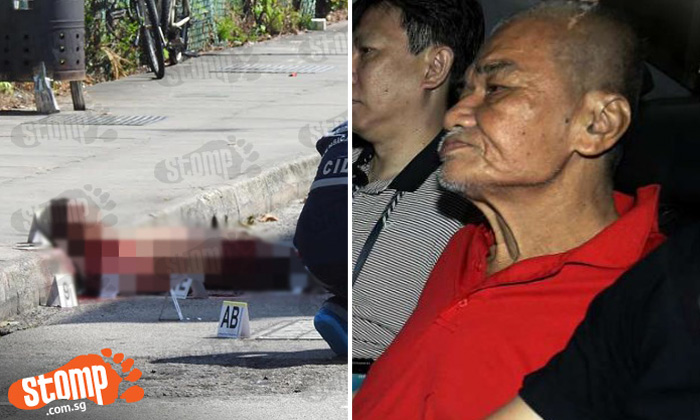 The 64-year-old man was charged on Friday (July 22) with the murder of a coffee shop helper along Lorong 23 Geylang about two weeks ago.

A 64-year-old man has been arrested in relation to a murder case at Lorong 23, Geylang.

A Stomper had shared photos of the incident on Jul 9, showing the victim lying bloodied on the road.

The victim was a 52-year-old man, former helper at the 'zi char' stall, and was found dead near Victoria Food Court after allegedly getting into a dispute with someone.

According to a press statement on Thursday (July 21), the police said that the suspect will be charged in court with murder on Friday (July 22).

The dead man had a deep cut from the left side of his ear to the top of his head, and a wooden stick was found nearby, reports said.

If convicted of murder, the suspect may be sentenced to death.

Shin Min Daily News identified the victim as Mr Goh Eng Thiam, a Chinese man who used to work at a stall in the coffee shop.

A regular patron told the Stomp Team that although he did not work there anymore, he still visited frequently.

He described the victim as a "very nice person", but added that he could be a little hot-tempered.