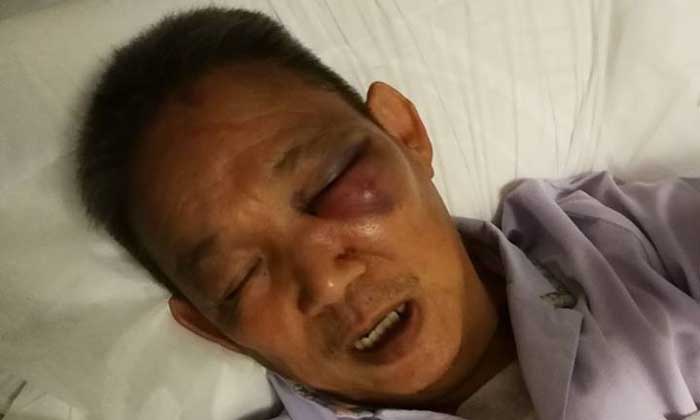 A 62-year-old electric bicycle (e-bike) rider has been arrested by the police for allegedly assaulting a 69-year-old man last Thursday (May 18) along Hougang Avenue 7.

The police said that suspect was arrested on Saturday (May 27) and will be charged for a negligent act which endangers life or the personal safety of others.

According to Facebook post by Ms Hui Ying, the victim's daughter, her father was crossing the road at about 9.30pm when the rider sped past him.

She said that the plastic bag her father held "accidentally brushed the man on his helmet".

The e-biker then stopped and allegedly assaulted her father.

Two passers-by are said to have rushed to his aid.

When the victim said he was going to call the police, the biker is believed to have fled the scene.

The victim is said to have been punched on his chest and face.

He was left with cuts on his left eye, lips and bruises.

Ms Hui Ying said her father was hospitalised due to his injuries and a heart attack that he suffered after the incident.

The suspect was arrested on Saturday (May 27) after follow-up investigations by officers from the Ang Mo Kio Police Division, reported The Straits Times.

Related Stories
"I will rape you!": Malaysian street vendor hurls vulgarities and threatens to sexually assault competitor
Ex-cameraman who assaulted man in attempted robbery at Tampines gets jail and caning
Inhumane thugs assault and disfigure tourist in China -- then taunt her to call the cops after attack
assault
violence
e-biker
arrest